Former Indian skipper, MS Dhoni has often been known for his calm demeanor in a pressure situation on the cricket field but the former India captain has often witnessed elevated heart rate as he felt scared. These moments arise especially when Dhoni is in the very early stages, the two-time world cup winning captain said on Thursday.

During a session conducted by MFORE, a Non-Profit Initiative that offers mind conditioning programs to athletes, Dhoni said, “In India, I feel there is still a big issue of accepting that there is some weakness when it comes to the mental aspects, but we generally term it as mental illness.”

He further added, “Nobody really says that, when I go to bat, the first 5 to 10 deliveries my heart rate is elevated, I feel the pressure, I feel a bit scared because that’s how everybody feels – how to cope with that? This is a small problem but a lot of times we hesitate to say it to a coach and that’s why the relationship between a player and coach is very important to be it any sport.”

The initiative was launched by former India cricketer Subramaniam Badrinath. Current Indian skipper, Virat Kohli also pointed out the importance of a healthy mind as the key to better performance.

In a media release, Virat said, “I think mental health and mental clarity is the most important factor in life; not just in sports. Badrinath and MFORE helping these cricketers will go a long way in them understanding themselves better and going out there and performing despite the conditions and situations being difficult for them.”

The veteran Indian off-spinner Ravichandran Ashwin said it’s important for a sportsperson to express his mental struggles and seek help if needed.

Ashwin said, “A lot of people address skills, speak about the mental aspect of the game. But no one can really put a roadmap and say what really a cricketer needs mentally. So, to be able to create a platform for such people to ask for help is an amazing initiative. I urge people to be more honest about themselves and understand that they need help.”

MS Dhoni reckons that a mental conditioning coach should be a regular fixture with a team/player and not just a temporary arrangement. 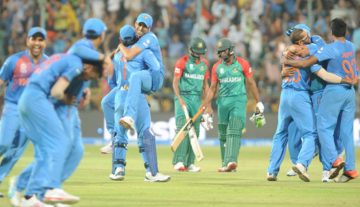 On This Day
By CricShots - Mar 23, 2020
When Bangladesh Celebrated Too Early Against India