From the long times, many fellow cricketers have complained that the Indian wicketkeeper-batsman and the former successful Indian captain MS Dhoni is hardly responsive in the phone calls. Recently, Dhoni has finally revealed the reason why he doesn’t pick up phone calls in most times.

The 37-year-old has admitted that there is a big divide between him and technology as he doesn’t use phones so much. He also believes to use the technology in the right way.

According to India Today, Dhoni said, “Me and technology, there is a big divide. I don’t use phones so much and there are lot of stories I don’t pick up phones. But I do use technology as well. When I am shown some videos, you wonder if I am playing it right. Technology has to be used in right way.”

Also read: MS Dhoni promises that he will learn and improve Tamil in next IPL

The 2007 ICC World T20 and 2011 ICC Cricket World Cup winning captain MS Dhoni has retired from the Test cricket in December 2014 and also has stepped down from the captaincy in international cricket in January 2017. However, he is still playing the limited-overs cricket in best form.

In the last month, after the end of the third and final ODI of the three-match ODI series against the hosts England at Leeds, a rumour was spreading that Dhoni has played his last international game and he is going to announce the retirement soon. The reason of that rumour was Dhoni took a match ball from the on-field umpires after the end of the Leeds ODI.

However, soon the Indian head coach Ravi Shastri dismissed that rumour by saying, “MS wanted to show the ball to Bharat Arun. He wanted to show him the wear and tear the ball had endured, to get a general idea of what the conditions were like. MS is not going anywhere.”

Now, Dhoni has opened up about that matter and agrees with Shastri’s comment on that. Dhoni claimed that he took the ball to understand getting the reverse-swing in future.

In an event in Mumbai on Tuesday, Dhoni said, “We have to keep working. So I took the match ball to see how to get reverse swing in future. So I asked for the match ball from umpire in that last ODI.” 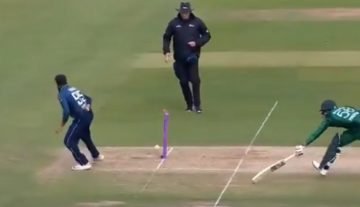