With the 12th edition of the Indian Premier League (IPL) is less than a week away, defending champions Chennai Super Kings (CSK) have kickstarted their training in a full-fledged manner. The MA Chidambaram stadium is glittering with the men-in-yellow. Moreover, the presence of ‘Thala’ MS Dhoni has turned on the heat and the fans are eagerly waiting for March 23 when their favorite team locks horns with Royal Challengers Bangalore (RCB) in the tournament opener.

CSK seems to be in no mood of compromising their legacy, especially, ‘Captain Cool’ Dhoni, who has been smashing the bowlers all over the place in the nets. In a recently shared video by one of the fans, the veteran wicketkeeper-batsman could be seen smashing a humongous six as the ball landed on the stadium rooftop.

Here’s the video of the humongous six:

One can only imagine that if such a shot came during the practice then imagine what he would do to the bowlers during the tournament.

ALSO READ: CSK Will Be Hoping Shane Watson To Continue His PSL Form

This season, the local fans were given free access to witness the practice match as well and on Monday, at least 12000 people showed at the venue to see their heroes in action. And as expected, the moment Dhoni stepped in the field, he received one of the loudest cheers from the home crowd.

CSK retained almost the entire squad from the previous season, getting in only Mohit Sharma and Ruturaj Gaekwad in the player auction.

On Tuesday, the BCCI announced the remaining fixtures for the league stages of the tournament as earlier only the fixtures for the first two weeks were announced and despite the Lok Sabha selection, all the franchises will be having a seven home games.

Here is CSK’s schedule for the season: 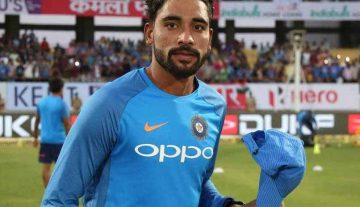