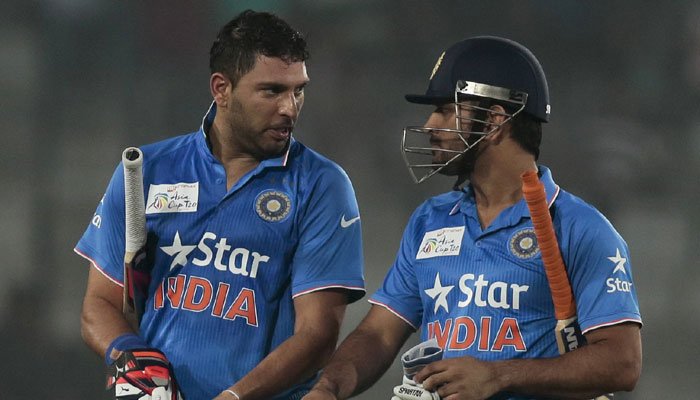 BCCI’s Chief of the selection committee MSK Prasad has finally shared his thoughts over the future of Indian stalwarts Yuvraj Singh and MS Dhoni. He feels that the selection panel will ‘see’ and ‘talk’ before taking any decision on the legends of Indian cricket.

During a recent chat with Wisden India, Prasad said, “We will see, we need to talk on that. We will have to take a decision, let’s see how it goes. We all know who can add value. Again, we will go slot by slot. We should know when to take a call. It’s not that suddenly you take a call and you are nowhere. You can’t be totally unprepared, so we need to be balanced on that aspect.”

Prasad made himself pretty clear about the taking a final decision over Dhoni and Yuvraj as he said that the performances in the Champions Trophy have given a lot of clarity for the selectors. He said, “The best thing that happened from our point of view was that the Champions Trophy was in England. That has really opened our mind in many aspects. We know what our real strengths are. There are a few shortcomings that we have noticed and maybe we will fix those shortcomings in the next 18 to 20 months that we have leading up to the World Cup.”

BCCI’s chief selector further added, “Whoever we have in mind, we will start giving them more opportunities so that they are mature enough by the time the World Cup comes around. In case we are picking a youngster, then he should be given due chances by the time he plays the World Cup.”

Prasad also made himself clear about the fact that the selectors are solely responsible for final team selection. He said, “Fortunately, whatever the selection committee meetings that we have had, whether it is with Mahi or with Virat, finally when our discussions and arguments are in the right direction, both of them are very accommodative and they give real importance to the process. Not many people know that. They all think it is Mahi who selects the team, or it is Virat who selects the team. It doesn’t happen like that.”

MSK Prasad concluded by talking about the effect of stardom of the Indian skippers over the years during the selection of the team. He said, “Frankly speaking when they sit in the selection committee, they sit as a captain. They never come with any kind of baggage behind them. All the meetings we have had so far have been interesting meetings. They have always given importance and priority to the selection committee. The final call is always ours, the selectors take the final call. If that means that, at times, we have to overrule the points that are raised, then so be it.”