Team India will be hosting New Zealand in the three-match ODI series following their whitewash of the Sri Lankan team in the recently concluded ODI series. Ahead of the opening game of the series against the Kiwis, former Indian selector MSK Prasad reckoned that the T20 superstar Suryakumar Yadav will be playing every match in the ODI series and he will be doing well in the near future in ODIs as well.

Suryakumar Yadav has impressed one and all with his flamboyant batting ever since his T20I debut in 2021. The innovative batter has been a run machine in the shortest format of the game with runs coming at a breathtaking pace. He climbed to the no. 1 position in the ICC rankings for T20I batters after a prolific T20 World Cup campaign in Australia and is not looking to vacate that position anytime soon.

With three centuries in just over six months for the Indian team, Suryakumar Yadav has been a revelation in T20Is. However, he has not been able to replicate the same in the ODIs. But former Indian selector MSK Prasad feels it is only a matter of time before the batting ace ‘leaves his mark’ in ODI cricket for the Men in Blues.

During a recent chat with rediff.com, MSK Prasad said, “It won’t be long before Suryakumar Yadav leaves his mark in the 50-over format too. Surya is an exceptional player. He is there in the T20 squad and Test squad so that speaks volumes about his adaptability. So if he is able to find a place in the T20 and Test squad, he will definitely do well in ODIs also. All that he has to do is wait for his time. I would say it won’t be long before he cements his place in the Indian team.”

ALSO READ: Shreyas Iyer Ruled Out Of The ODI Series Against New Zealand

Suryakumar Yadav was named in India’s squad for the upcoming ODI series, despite several batters fighting for the same spot. However, the latest injury to Shreyas Iyer, ruling him out of the upcoming series, has opened the doors for the Mumbai-born cricketer to be included in the playing XI, although Iyer has been replaced by Rajat Patidar who is yet to make his debut for the national side. 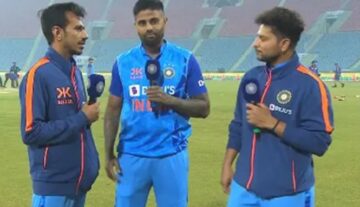