On Saturday, Former England skipper, Nasser Hussain asserted that there is no point in doubting cricketer like MS Dhoni as he is a once-in-a-generation player he can’t be “pushed into retirement”. Hussain, one of the most respected voices in world cricket feels that former Indian skipper still has a lot to offer in Indian cricket.

During a show on Star Sports, Hussain was heard saying, “Once Dhoni is gone, there is no getting him back. There are some legends of the game, appreciating while around because they are once-in-a-generation cricketer and don’t push him into retirement too early. Only Dhoni knows his mental state and in the end, the selectors select and players turn up when asked to.”

Dhoni has been on a sabbatical from competitive cricket ever since India’s loss in the semi-final of the ICC World Cup 2019 against New Zealand in July. However, legendary Indian cricketers Sunil Gavaskar and Kapil Dev have clarified that it’s getting increasingly difficult for the Jharkhand dasher to make an international return after such prolonged sabbatical. But Hussain has a different opinion.

Hussain further elaborated, “Is MS Dhoni still good enough to get in the Indian side? It is as simple as that. That should apply to anyone across the board. What I have seen of Dhoni, I still think MS Dhoni has a huge amount to offer for Indian cricket.”

However one of England’s shrewdest captains went on to acknowledge that Dhoni did made some mistakes on a couple of occasions during World Cup where he couldn’t force the pace of the innings.  While Hussain’s comments didn’t specify which match he was talking about but it is in all likelihood the games against West Indies and England where he failed to force the pace of the Indian innings.

Explaining the same, Nasser Hussain said, “Yes, it has been one or two occasions where he (MSD) got it wrong in run chases, there was a World Cup game in England where he sort of blocked at the end for some unknown reason, but in general MS Dhoni is still a really good talent and be careful what you wish for.” 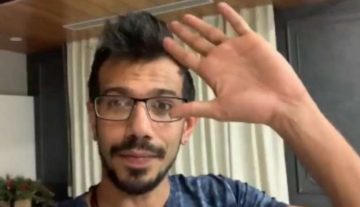 Videos
By CricShots - Apr 7, 2020
Yuzvendra Chahal Brings Out The ‘Home Edition’ Of His Show