Test cricket has always been one of the enthralling formats of the game. More often than not it produces some picturesque moments that stay in memories of the fans around the world for a very long time. Recently, what has caught the attention of the spectators is the beautiful delivery by Indian pacer, Navdeep Saini. The India A and South Africa A teams were scheduled to play three unofficial Tests against each other.

In the second unofficial Test, Navdeep Saini announced his arrival with the new ball as he scalped crucial wickets for the team. However, the wicket of Beuran Hendricks is what fetched Saini some praises from the cricketing fraternity. He was running in to bowl his 21st over when Hendricks had just walked onto the field. The pacer bowled a splendid delivery into the stumps that got a bit of movement from the pitch and seamed away.

Truly one of the most beautiful sights in cricket as Navdeep Saini uproots Beuran Hendricks' off stump.

Marco Jansen however has been the 1st SA A batsmen to score 50 and is desperately hoping for the number 11 to just stay with him.

About the match, Ishan Porel and Navdeep Saini were the wreckers in chief for India as they picked three wickets each in South Africa’s first innings. Owing to this, the hosts were restricted at 297. When the India A side took the charge of the field with the bat, Prithvi Shaw and Priyank Panchal provided the team with a decent start.

ALSO READ: Kane Williamson And Ravindra Jadeja Ruled Out Of The Mumbai Test

Hanuma Vihari held the fort of the side by hitting an impressive half-century. Whereas keeper-batter Ishan Kishan fell just one run short of his half-century. South Africa’s Glenton Stuurman ran through India’s batting unit as he clinched four wickets. The team was thus wrapped up for 276.

The hosts then walked in for their second innings wherein their openers Sarel Erwee and skipper Pieter Malan provided the team with a steady start. Saurabh Kumar provided India with the first breakthrough as he sent back Sarel Erwee quite early. 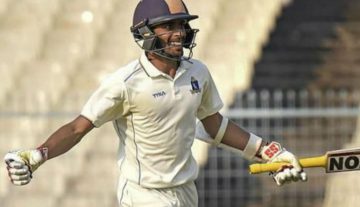