New Zealand fast bowler, Neil Wagner was seen gifting his pair of pads to a fan at the Lord’s Stadium during the second day’s play of the ongoing opening Test of the three-match series against England. The series marks the first challenge for Brendon McCullum after taking over as the head coach of the struggling English Test team. It is also Ben Stokes’ first match as the full-time captain in the longest format of the game.

During the second day’s play of the first Test, England got bundled out for 141 after starting the day at their overnight score of 116/7. On the sides, Wagner was seen making a gesture by giving away his pads to a fan who was ecstatic after receiving them.

Here is a video of the moment:

Neil Wagner gifted a pair of pads to one of the fan at Lord's. What a wonderful and sweet gesture by Wagner! pic.twitter.com/h4dfQERKXG

The action didn’t end there and it was the visiting players who then produced a similar show with the ball. The Kiwi pacers, Trent Boult, Tim Southee, and Kyle Jamieson scalped a couple of wickets each as England reached 116/7 at stumps on Day 1.

England eventually got bundled out for 141 on Day 2 as the hosts took a slender lead of nine runs. Zak Crawley was the top scorer for England with 43 runs, while Alex Lees made 25 as the rest of their batting order suffered a collapse.

The match also saw a concussion substitute in the form of Jack Leach. The spinner landed awkwardly while trying to save a four, following which he was withdrawn from the contest. Matt Parkinson has been named as Leach’s replacement and will be making his Test debut in the ongoing encounter. 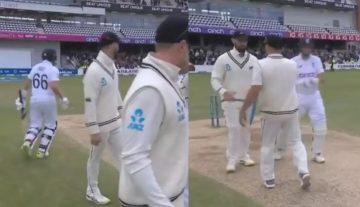