The young Indian wicket-keeper batsman, Rishabh Pant has been touted to being seen as a successor of the former Indian skipper, MS Dhoni. The southpaw made his international debut in February 2017 but started featuring regularly for the Indian squad after he made his Test debut against England at the Trent Bridge in Nottingham. Ever since his career has been criticized for being inconsistent.

After a couple of months, Pant has failed in ODI cricket and recently, he was also a part of Team India for the 2019 World Cup in England and Wales. Albeit he wasn’t the first-choice batsman, he was called up as a replacement of Shikhar Dhawan. Thereafter, the youngster played the ODI and T20I series in the West Indies.

But apart from his half-century in the third T20I at the Providence Stadium in Guyana, he has failed more often than not. The Uttarakhand-born recently was a part of the three-match T20I series versus South Africa and he flattered to deceive yet again. At the PCA Stadium in Mohali, Pant could manage only four runs and then got 19 runs at the M Chinnaswamy in Bengaluru before playing a rash shot of Bjorn Fortuin.

Meanwhile, the fans aren’t happy with Pant by any stretch of the imagination. In limited-overs cricket, donning the India jersey, Pant has an average of less than 2 The fans want Sanju Samson and Ishan Kishan in the mix. Samson has been in the selectors’ radar for quite some time along with Ishan as well.

The likes of Gautam Gambhir have backed Samson, so much so that he wanted the youngster to play the World Cup. As far as Kishan is concerned, he is a fearless batsman and has come up the ranks from the U19 circuit. The left-hander had a decent outing off late versus South Africa A.

Why can’t we go for another keeper batsman. Why don’t we try Sanju Samson and Ishan Kishan.? Rishabh pant is over rated player in international cricket. Not consistent

Why don’t they try Pujara in the number 4!

Rishabh Pant is the most irresponsible cricketer i have seen in recent times….

Even if he hits one 50 or another century, this attitude of his sucks big time and is killing the opportunities for people like Ishan Kishan and sanju samson#INDvSA

Rishabh Pant in his last 10 innings:#INDvsSA #RishabhPant .
Next time may be Sanju Samson or Ishan Kisan will be playing for India.
What you think ? pic.twitter.com/CLU1oXnI3L

Seems as if #Indian selectors have considered #Pant as a mandatory cardigan for the team! Move on!
It's time to try #SanjuSamson now! If #RishabhPant can be given so many chances, #Samson must be given 2-3 series since he's an experienced and proven performer from #IPL#INDvSA

@BCCI @imVkohli Why Ur Repeatedly Using Irresponsible #RishabhPant even after his Consistent Failures. Plz Bring back #WriddhimanSaha in Tests Matches. Give One Chance to #SanjuSamson in T20s matches https://t.co/qv9fufLUZl

There is a lot of talented Wk/Batsman in India like #IshaanKishan , #SanjuSamson but Selectors think that only #RishabhPant have talent.

Lots of #Moments #LOST by #RishabhPant

Now its time to move on with this #talent named #SanjuSamson

If not then this is #unfair and #wasting of #talent and #hope of others…. @BCCI @imVkohli @virendersehwag @SGanguly99 @vikrantgupta73 pic.twitter.com/OqE7fBEXpY

End of #RishabhPant The most stupidest player ever seen.Throw this player out of the team @RishabhPant17 Too much opportunities https://t.co/O82gwav97J was the last time.There are plenty of players waiting.Time has finally come for them. #IshanKishan #SanjuSamson @BCCI Play them.

Again a Poor and irresponsible shot by #RishabhPant
Throw his Wicket again.
Is he really a Finisher ?
Why everyone is pampering him without consistent Performance ?
There are others in waiting#IshanKishan #SanjuSamson#INDvSA pic.twitter.com/bNzfhz6Uut 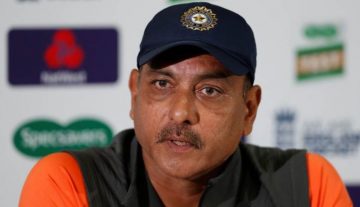 Twitter Reaction
By CricShots - Dec 10, 2018
Ravi Shastri’s Balls Were in His Mouth During Adelaide Test