Bangladesh and Pakistan are locking horns with each other at the Adelaide Oval in their last Super-12 stage game of the T20 World Cup 2022. Technology was brought into the game of cricket to improve the accuracy of decisions but it has also been a reason for some controversial decisions by third umpires. One such decision was handed out in the ongoing tournament when Shakib Al Hasan was ruled LBW overlooking the spike on Ultra Edge.

With the Netherlands’ win over South Africa in their final group game, the match between Pakistan and Bangladesh has become the virtual quarter-final. The Pakistani bowlers did not allow Bangladesh to come out to go all guns blazing and were able to get rid of the dangerous Shakib Al Hasan on duck.

Bangladesh’s skipper was dismissed through LBW on the first ball he faced but his wicket was engulfed in the controversy caused by the third umpire. Shadab Khan was bowling in the 11th over of the innings and Shakib Al Hasan entered the crease on the fifth ball. The batter danced down the track to start with an aggressive shot but missed the line of the ball as tossed-up delivery from Shadab dipped on him.

The ball hit his boot and the fielding team appealed in unison for the wicket. Umpire took a little time to raise his finger but ruled the batter LBW eventually. Shakib went for the review straightaway claiming he had edged the ball.

The third umpire checked the slow-motion replay on Ultra Edge and it showed a clear spike as the ball passed near the ball. Many thought that it is an indicator of a clear edge but the TV umpire claimed that the spike occurred before the ball reached the bat. Considering that the batter has not edged the ball, the TV umpire checked ball tracking and stayed with the decision given by the umpire on the field.

Here is the video of the dismissal of Shakib Al Hasan:

The controversial decision caused a lot of reaction and the fans claimed ‘cheating’ for Shakib Al Hasan’s dismissal on Twitter.

This is blatant cheating man. How on earth have we allowed this to happen #PAKvsBAN #ShakibAlHasan

What is that decision?? 😳😳.. There was a gap between bat and the pitch.. These pakistanis speak about cheating 🤣🤣🤣🤣#PAKvsBAN #ShakibAlHasan

#CricketTwitter, was that out or not-out?

If Pakistan had even an iota of shame, they would have called back #ShakibAlHasan#PAKvsBAN pic.twitter.com/Ej94oNeBjo

#Cheating #ShakibAlHasan #PAKvsBAN
Pakistan don't have that much money to buy umpires!!
So they have use this method ~ pic.twitter.com/rW2qiCihcN

Clear gap between bat and ground and a clear clear edge…
What horrible umpiring…
All this cheating just make pak reach semis..
Just Imagine if it was india in place of pak..
How much these paki fans and analyst would have cried.
Poor @ICC#ShakibAlHasan#PAKvBAN pic.twitter.com/6VGi4tE2vy 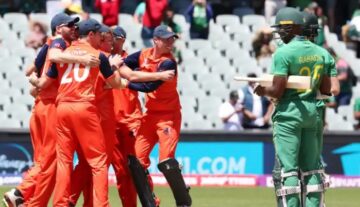