In a shocking display of batting, the Big Bash League (BBL) franchise, Sydney Thunder got bundled out for just 15 in the match against Adelaide Strikers, losing the game by 124 runs in BBL. The whole team only managed to make a score of 15, which is now the lowest score ever in the shortest format of the game. Henry Thorton bowled a phenomenal spell of five wickets for the Strikers and conceded just three runs and was the chief architect of the demolition.

Wes Agar picked 4 wickets while Matthew Short picked up one wicket. For Thunder, Fazalhaq Farooqi also scalped 3 wickets while Gurinder Sandhu, Daniel Sams, and Brendan Doggett picked 2 wickets each as Strikers put on 139/9 in 20 overs after winning the toss and batting first.

What is quite shocking is that Thunder includes one of the best batters in the world when it comes to T20s. They are Alex Hales, and Rilee Rossouw who are some of the top batters in T20 cricket, and despite their presence, the team got bowled out for a meager score of 15.

Earlier, the Strikers won the toss and they posted 139/9 in 20 overs. Chris Lynn top-scored with 36 scored off 27 deliveries. Colin de Grandhomme played a decent knock of 33 off 24 balls that included 2 fours and 2 sixes respectively. It was a low total which means that the Sydney Showground Stadium in Sydney was tough to bat on.

Not to forget, the Strikers bowled out Thunder for just 15 inside the powerplay. The 10th and last wicket fell in form of Brendan Doggett on the penultimate ball of the 6th over. Incidentally, the Number 10 Doggett was the top scorer for his side with a score of 4 runs.

After Thunder registered the unwanted record, social media was buzzing with reactions.

The Sydney Thunder were just dismissed for 15 in their BBL match against Adelaide. A batting line up that included Alex Hales, Rilee Rossouw & Jason Sangha. Top scorer got 4.

The lowest total in the history of men's T20s! 😬#BBL12 pic.twitter.com/4ScRycoZRH

There have been only two BBL matches where 20 wickets fell, and another eight with 19. The 19-154 tonight easily lowers the previous lowest run aggregate for those ten matches: 19-233 at Alice Springs, 2019-20 – Hurricanes v Sixers 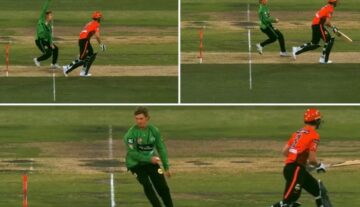