New Zealand assistant coach Luke Ronchi was seen fielding during the second ODI against India at Eden Park in Auckland on Saturday with no player in the squad fit enough to replace Tim Southee in the outfield. Southee was reportedly ill but still included in the playing 11 as the players like Scott Kuggeleijn and Mitchell Santner were unavailable due to flu and a stomach bug respectively.

Due to his illness, Southee completed his quota of 10 overs quite early and went off the field, but after a few overs with no player there to replace him, Ronchi came on to the field. The 38-year-old wicketkeeper-batsman last represented New Zealand in 2017 and is their assistant coach now.

Despite his illness, Southee played a crucial role for the Balcaps when they were defending a decent total of 273, he took two wickets, including the prized scalp of Virat Kohli, for 41 runs. As a result, the hosts defeated the men in blue by 22 runs and tool take an unassailable 2-0 lead in the three-match series.

After winning the toss, Kohli had asked the hosts to bat first and got off to a good start thanks to Martin Guptill’s half-century before India made a comeback by reducing the Kiwis from a commanding position of 142/1 to 197 for 8. Much like previous games, it was Ross Taylor once again, who saved New Zealand from further embarrassment. He alongside Kyle Jamieson added 76 runs for the 9th wicket. New Zeland finished their quota of 50 overs with the tally of 273/8.

New Zealand got off to a flyer with the ball with quick wickets of openers Mayank Agarwal and Prithvi Shaw, before Southee castled Kohli. KL Rahul and Kedar Jadhav also failed to prove their worth. Similar to the last ODI, Shreyas Iyer scored his seventh ODI half-century before being dismissed by Hamish Bennett.

Ravindra Jadeja also went on to score a half-century, putting on a couple of good partnerships with Shardul Thakur and Navdeep Saini but New Zealand eventually came out on top to win the series as India was bundled out for 251.

Here is how Twitter reacted to Ronchi coming in as replacement:

Enjoy! What Uni is it? Keep it casual, comfy & quiet 😀

I went courtesy of a free ticket. Wouldn't pay for that in a hurry. Show more replays. Tell the crowd who has subbed on or off. Apparently Ronchi got a run, no ground announcements

New Zealand were short of fit players in Auckland, and fielding coach Luke Ronchi is on the field!

Was it first time in the history or it has happened before ??@MazherArshad 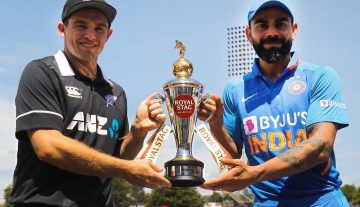