New Zealand has been struggling to have a fit and experience bowling unit as their three leading seamers were ruled out from the squad named on Thursday for the ODI series against India. New Zealand’s fortunes have gone from bad to worse since making the World Cup final last year, losing three Tests against Australia and three T20Is against India.

The pace bowling trio of Trent Boult (broken hand), Lockie Ferguson (calf strain) and Matt Henry (broken thumb), who were all injured in Australia, have not recovered in time for the three ODIs against India which is scheduled to commence next week after the final two T20I matches.

ALSO READ: Virat Kohli Went Past The Record Of MS Dhoni As The Indian Skipper

Kyle Jamieson has received the maiden call-up in the national ODI squad while Scott Kuggeleijn and Hamish Bennett are recalled after last playing ODIs in Ireland in 2017. Tom Latham, who broke a finger on his right hand in the third Test against Australia, has been cleared to resume playing.

The series will be the first ODIs for New Zealand since they beat India in the World Cup semi-finals last year then lost to England in the final, and coach Gary Stead said they are in no mood of taking things lightly.

ALSO READ: Kane Williamson Doesn’t Feel Super-Overs Are The Friends Of The Blackcaps

The head coach said, “We’ve seen from the Twenty20 series (India) are clearly as strong as ever. Tim Southee has an important job leading our new-look pace attack, which has a huge opportunity against some of the very best batsmen in the world. While the bowling line-up has a fresh look, the batting is very settled and we’ll likely have the same top eight batsmen from the World Cup finals.” 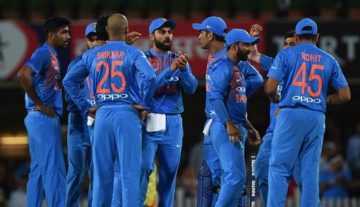 Article
By CricShots - Nov 28, 2017
CoA Planning To Include Pakistan Series In New FTP For Team India