On Wednesday, Virat Kohli surpassed the record of his predecessor, MS Dhoni to become the leading run-scoring captain for India in T20Is. Kohli achieved this feat during his 38-run knock in the third T20I against New Zealand in Hamilton. Virat took just 37 innings to overtake Dhoni’s tally of 1,112 runs as T20I captain.

South African Faf du Plessis leads the chart with 1,273 runs and he is followed by New Zealand skipper Kane Williamson who has 1,148 runs to his name as captain in the shortest format. Records and Kohli always go hand-in-hand in recent times as every time Indian skipper comes out to bat he is always within touching distance of breaking some record or the other.

ALSO READ: Netizens Went Berserk As India Won A Humdinger In The Super Over

In the match, Rohit Sharma and KL Rahul got India off to a flying start as they added 69 runs in powerplay — that too without losing any wicket. Rohit played a blistering knock of 65 runs and kept on smashing the Kiwi bowlers. However, New Zealand bowlers removed Rahul and Rohit in the ninth and 11th over respectively to bring their side back in the game.

After their dismissals, Kohli, and Shreyas Iyer smashed a few boundaries in the middle overs to balance the innings for India. Just when things looked in control for the men in blue, Iyer was dismissed by Santner while Kohli failed to give a powerful finish to the innings. In the end, all they managed was 179 on the board with the help of Manish Pandey and Ravindra Jadeja. 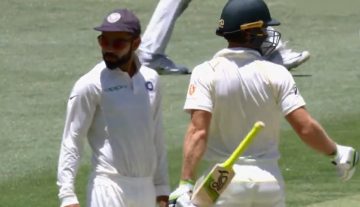 News
By CricShots - Mar 17, 2020
Australian Team Was Furious With Virat Kohli For His Antics?