Although it looked like it will be all about the Indian batters after the openers Shubman Gill and Shikhar Dhawan put on over 100 runs on the board, the West Indies bowlers, particularly their spinners and their fielders manage to take them back into the ongoing opening ODI. While it was captain Nicholas Pooran himself whose direct hit brought an end to Gill’s innings after he had scored a 64, later superb catches from Shamarh Brooks and Pooran saw the end of the innings of Dhawan (97) and Shreyas Iyer (54).

While Dhawan was dismissed in the 34th over, Iyer followed him as well got out soon after in the 36th over with Pooran taking an airborne catch. In the fifth ball of the 36th over being bowled by Gudakesh Motie, a well-set Iyer tried to go over cover perhaps in a bid to score runs at a brisk pace and bat out the opposition from the match.

However, Shreyas Iyer failed to clear Nicholas Pooran fielding in the cover region who timed his jump to perfection and managed to stretch his right hand enough to grab the ball before seemingly plucking it out of air. Interestingly, the bowler Motie also jumped almost while keeping an eye on whether Pooran had taken the catch cleanly. Motie finished his spell with figures of 2 for 54.

Here is the video of the catch from Nicholas Pooran:

.@ShreyasIyer15 is gone, caught by @nicholas_47. So disappointing, his scuffed shot. 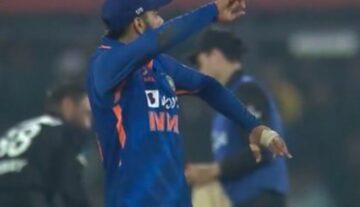 Social Shots
By CricShots - Jan 24, 2023
Virat Kohli Churns Out A Dance Move As He Took The Catch Of Glenn Phillips