Often, a glaring mistake on the big stage can be enough for a players to imprint an unwashable stain on a his career. Odean Smith has become the latest to face the heat  after plucking a crucial wicket against Ireland which was later declared a no-ball, robbing his team of a chance to make a come back. West Indies have suffered yet another upset at the ongoing World T20 Down Under, witnessing an unforgettable loss by 8 wickets against Ireland at the Bellerive Oval in Hobart on Friday.

With the loss, the Windies are now eliminated from the tournament which is a moment of great humiliation for the two-time champions given their past accolades. However, the Caribbean outfit has only themselves to blame for the outcome, having made one huge blunder after another thus allowing Ireland to dominate the game throughout the game.

Having set a subpar target of 147, the Irish openers openers came out all guns blazing smashed 64 runs without losing a wicket in the powerplay to race to 64/0, a record at the ongoing tournament so far. However, Akeal Hossein offered them a glimpse of hope by getting the important wicket of skipper, Andy Balbirinie and Odean Smith had the perfect opportunity to pile onto the pressure in his second spell in the 12th over while Ireland still needed a good 40 runs to win. Having elicited a thick edge earlier in the over, Smith looked fired up with Lorcan Tucker on strike on the fourth ball.

Odean Smith delivered a short ball, catching the batter off guard and forcing him into a desperate pull. The ball looped up high and resulted in an easy catch for Smith who flung the ball ferociously at the ground in frustration even as the team gathered around him in muted celebrations. However, Tucker left amused as he was asked to wait near the ropes instead of heading to the dugout, since the umpires suspected that Smith’s front foot had overshot the crease.

After a long hold, the third umpire confirmed those doubts, and not only had Odean Smith and the West Indies been deprived of a wicket but also penalized an extra run and a free hit for the opposition. The disappointment in the aftermath of the decision was writ large on the entire Caribbean team’s face, including Odean Smith who simply rolled back his eyes well aware of the humongous error he had made. The internet only piled on to his misery with some harsh words for the all-rounder while some chose to see the lighter side of the incident that eventually culminated in Ireland’s win.

Here is the how the netizens reacted:

Lorcan Tucker got given a reprieve, as Odean Smith had bowled a 'No Ball'

Odean Smith got wicket on a NO BALL!

Lorcan Tucker called back on field!

2 time champions on verge of getting knocked out without qualifying for Super 12 stage!#WIvIRE#T20WorldCup pic.twitter.com/HFgbginyOx

Fun and jokes aside, WHO selected Odean Smith? @windiescricket

Lol Odean Smith takes Tucker on a No Ball, pretty symbolic of how Windies campaign went here, such a frusterating sight for Windies fans

Why tf Odean smith so bad 😭😭

Drama drama..Odean Smith takes a wicket and it's a no ball. Ofcourse what did you expect from Odean 👎 hit a huge six tucker cmon

Apt. Odean Smith takes a wicket and it's a no ball. It's just poetic justice for the way they have played this World Cup. Jai Mata Di. 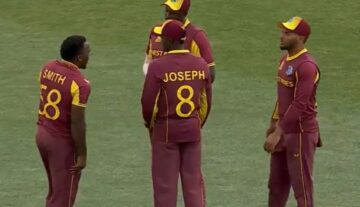