The T20 International series between New Zealand and India is rather competitive than the One-Day International series involving two nations. Hosts New Zealand gave the Indian team no space in T20I series as they won the opening match of the series with total dominance, but Man in Blue didn’t take long to roar back into the series by winning the second one. Thus, before the final game, the series scoreline stands on an even keel at 1-1.

The stage is set for a cracker series decider at Hamilton, where Rohit Sharma won the toss and opted to bowl first. India made one change into their playing XI as Kuldeep Yadav came in place of his spin partner Yuzvendra Chahal while New Zealand replaced Lockie Ferguson with Blair Tickner.

Openers Colin Munro and Tim Seifert were in the mood of some destruction and they did the same. Every Indian bowler received a pelting as New Zealand raced to 80 runs in no time, but then came India’s Chinaman, Kuldeep Yadav, and dismissed dangerous looking Seifert. Meanwhile, Munro raced to yet another T20I half-century but Kuldeep also halted his 72-run innings with some clever bowling.

Krunal Pandya had an off day and he leaked 54 runs in his allotted four overs. Bhuvneshwar Kumar and Khaleel Ahmed were also unable to stop the run flowing and went for some cleaners. However, both picked a timely wicket of Kiwi skipper Kane Williamson and dangerous looking Colin de Grandhomme.

Indian fielding was very poor throughout the innings and dropped several catches along with misfielding. Hardik Pandya was the unlucky bowler most of the time.

Also Read: Rohit Sharma is looking forward to the series decider in Hamilton

Hardik Pandya will have luckier days than today……

All I saw today is Indian fielders running behind a catch & ball landing somewhere else.

Shankar Anna all over the ground but can't gather the ball.

That dropped catch of Colin Munro by Khaleel Ahmed was too difficult to be dropped. #NZvIndT20 #NZvIND

I will again repeat, Khaleel Ahmed is neither a bowler nor a fielder!!#NZvIND

Last two overs went for 20 runs and took Kiwi total to 212/4 in 20 overs. Ross Taylor smashed one six and a four to take his team’s total over 200. India have to chase this mountainous target down if they want to keep their unbeaten T20I series record alive.Mid Innings: NZ vs IND (3rd T20I): Kiwi batsmen smacked Indian bowlers, India to chase 213 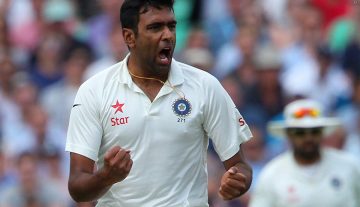 Article
By CricShots - Jul 27, 2017
Ravichandran Ashwin and his unpredictable variations