Over the years,  The Mumbai Indians have become one of the most successful teams in IPL’s 12-year history. Indian team limited-overs vice-captain Rohit Sharma has been at the helm of the success for the Mumbai Indians as the hometown lad has become a fan favorite across the globe. On this day, a year ago, India’s swashbuckling opener lead MI to its 4th IPL title aginst old foes Chennai Super Kings led by MS Dhoni.

Winning the all-important toss, Rohit Sharma decided to bat first on a flat wicket at the Rajiv Gandhi International Stadium in Hyderabad. Mumbai Indians’ managed a competitive 148 with T-20 veteran Kiron Pollard being MI’s top scorer with 41 of 25 balls.

Chasing 150 to win, Shane Watson batted with a bloodied knee, waging a lone battle for CSK. Watson helped CSK drag the game into the final over as CSK needed nine runs to win the lift the title.

Rohit Sharma handed the ball to MI veteran and Sri Lankan in Lasith Malinga. Malinga had a poor outing in the match leaking 42  runs off his first 3 overs. However, MI skipper had faith in Malinga’s experience to pull the match away from CSK.

CSK managed to add 4 runs to their scoreboard before Watson was sent back to the hut courtesy of a run-out. Shardul Thakur walked joined Ravindra Jadeja on the crease and looked to sail CSK’s ship through. Shardul Thakur managed to 2 runs off an awkward full toss off the penultimate ball of the innings.

With Super-Over rules applied, CSK needed just one run to push for a Super Over and two for a win.  The equation read 2 runs to win off 1 ball fas Malinga readied his strike to bowl against Shardul Thakur. The stadium felt pin dropped to silence as fans awaited the final delivery. With the result dragging down to the final ball of the nail-biting final, it was set up for a memorable goodbye to the 12th edition of IPL.

Malinga outfoxed Thakur with a slower one and trapped him right in front. The umpire raised his finger to signal the dismissal of  Shardul Thakur. The MI  roared in delight dugout ran across towards the pitch. The celebrations began as MI pulled off an incredible one-run win. The crowd went crazy and roared in delight at the wild celebrations of the MI players. 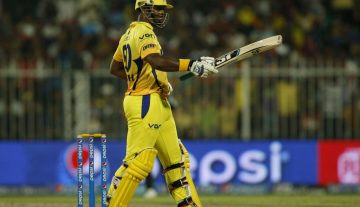