The Irish batter, Paul Stirling has come into the limelight after playing an explosive inning on England soil on Thursday. Playing for Birmingham Bears, he scored 119 runs in 51 balls. This has become the biggest innings of his T20 career. He did this feat in the match against Northants Steelbacks. Sterling hit 9 fours and 10 sixes in his innings. He scored 34 runs in an over, which included five consecutive sixes and a four.

Batting first, Birmingham Bears scored 207 runs for the loss of 3 wickets in this rain-affected match. The bears started poorly in this match of 16 overs. They lost two wickets fall in the first four overs. After this, Paul Sterling took the lead and turned the game upside down. He shared a partnership of 170 runs in 70 balls for the third wicket with Sam Hahn. Hahn played an innings of 66 runs in 32 balls, which included one six and 9 fours.

Here is the video of the thrashing by Paul Stirling:

Paul Sterling’s dangerous form was seen in the 13th over of the innings. He scored 34 runs in this over of medium-pacer James Sales. He hit a six off the first, second, third, fourth, and fifth balls of the over and ended the over with a boundary. Sterling was dismissed by right-arm fast bowler Ben Sanderson. In reply to 207 runs, the Steelbacks team was reduced to 81 runs in 14.2 overs.

The Irish right-hander made headlines due to the destructive innings in a crucial game. The netizens raised questions over the Indian Premier League (IPL) franchises for not picking Paul Stirling as he went unsold in the mega-auction for the ongoing 15th edition of the tournament.

Here is the how the fans reacted to the smashing by Paul Stirling:

I checked his stats and it's fantastic with a 140+ strike rate for his T20 career. Why isn't he in IPL? https://t.co/m99FLWdBEo

Highly unfortunate that he didn't get an IPL contract.

He surely deserved an ipl contract

H should have been replacement of hales not Finch for kkr

So surprising that the likes of Finch get so many chances despite repeated failures but Sterling has never been picked at the IPL despite performing in various leagues across the world, can think of atleast a couple of teams where he could have made a solid impact. 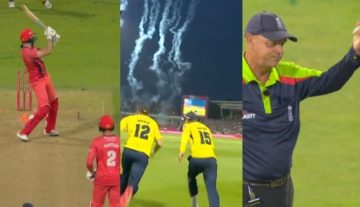 Videos
By CricShots - Jul 17, 2022
Hampshire Wins The T20 Blast With A Thrilling Last Over Finish