The fiery Delhi Capitals (DC) opener, Prithvi Shaw [39 off 22 balls] came down on his knees during the encounter against Punjab Kings (PBKS) after he suffered a fiery blow on his box as the fast bowler, Riley Meredith delivered a fearsome ball. It all happened on the final ball of the 3rd over bowled by Riley Meredith when Prithvi Shaw, in an attempt to pull a pacy back of the length delivery by the Australian fast bowler, missed it and ended up getting hit on the box.

Such was the brutality of the hit that Prithvi Shaw was immediately floored, grimacing in pain. Mohammed Shami, in what was a brilliant ‘Spirit of Cricket’ moment immediately came running and attend the youngster. Shaw eventually got back on his feet following the treatment by the physio expert and continued his usual onslaught.

ALSO READ: James Neesham Opens Up On Getting Dismissed On A Golden Duck Against CSK

Ouch: That would have hurt https://t.co/Y9MYz7f8np

Shaw was seen in agonizing pain after suffering a blow on his crown jewels and laid there for a couple of minutes before the DC physio ran onto the ground. However, the relieving news for DC was that Shaw recovered quickly. Now, a video has surfaced online wherein the youngster can be seen checking beneath his underpants and smiling after being hit by the ball of Meredith.

Owing to some power hitting from Shaw, DC ended the powerplay at 0/63. Prithvi Shaw’s innings eventually came to an end as Harpreet Brar knocked him over with a ball that turned at the last moment to beat his attempted inside-out drive and dislodge his stumps.

WATCH – Deepak Hooda Got Dismissed After A huge Comedy Of Errors

But by then, Shaw and Dhawan had already laid a platform for another win for DC, and later on, Dhawan and Steve Smith continued the game forward as the 2020 runners-up have already racked up 103 runs in the 12th over while chasing down .166. 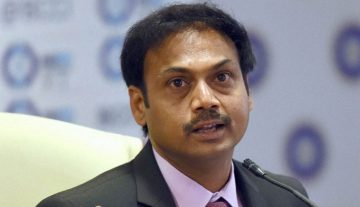