The veteran Indian batsman, Ajinkya Rahane had just an average outing in the 12th edition of the Indian Premier League (IPL) where he plied his trade for the Rajasthan Royals (RR). The tournament started with him leading the franchise, but he failed to deliver much as a captain and as a result of that he was replaced by Steve Smith, who took the captaincy reins.

Immediately, Rahane found his lost touch with the bat and he went on to score a century against the Delhi Capitals (DC) at the Sawai Mansingh Stadium in Jaipur. Unfortunately, the knock went in vain. Due to commitments for the Australian national team ahead of the World Cup in England and Wales, Smith left and Rahane got the captaincy reins for the Royals.

The Royals couldn’t go to the playoffs. Ajinkya finished the season with 393 runs from 14 matches at an average of 32.75. Amidst the chock-a-block cricketing schedule, he is taking much-needed time-off. Recently, Rahane uploaded a picture of him relaxing in front of a television set at home.

In his Instagram handle, he also asked fans to guess what he was doing. Rahane captioned the picture and wrote, “Any guesses what I’m watching right now? #ThursdayThoughts,”.

His Indian teammate Shikhar Dhawan trolled Rahane on his post and wrote, “TV aur kya, (What else other than television)”. Here is the screenshot of Dhawan’s comment on Rahane’s post:

As far as Dhawan is concerned, his team Delhi Capitals (DC) progressed to the second Qualifier of IPL 2019, beating the Sunrisers Hyderabad (SRH) in the eliminator. They will now be locking horns with Chennai Super Kings (CSK) in Visakhapatnam. Dhawan is expected to play a crucial role in the game as he has been in great form with the bat giving DC good starts which is one of the reasons for their success.

The southpaw will be seen playing for Team India in the upcoming World Cup in England and Wales. The Men in Blue will start their campaign against South Africa on June 5 at the Rose Bowl in Southampton. 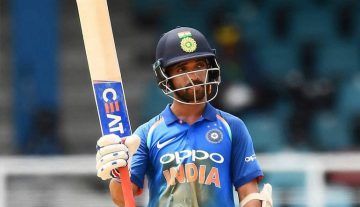