In the third match of Kings XI Punjab (KXIP) against Rajasthan Royals (RR) in the ongoing Indian Premier League (IPL) 2020, Rahul Tewatia gave the testimony of his brilliant hitting skills as he smashed 5 sixes off Sheldon Cotrell in the 18th over of the chase when RR was requiring 51 runs off last three overs.

Earlier, with the pitch offering nothing to the bowlers and the dimensions of the ground being smaller in size, Nicholas Pooran did his side a big favor in the clash. Rajasthan Royals came out all guns blazing after KXIP smashed as many as 223 for 2 in their allotted 20 overs.

Mayank Agarwal had amassed 106 in just 50 balls as he made a huge partnership of 183 runs with fellow opener KL Rahul to guide Punjab to the huge total. But the big total did not stop the Royals from going for the from the very first ball. Despite losing Jos Buttler cheaply, Steve Smith and Sanju Samson took the attack to the opposition.

At the end of the powerplay, the Royals reached a score of 69 for the loss of 1 wicket. Even after the end of the fielding restrictions, both the batsmen kept playing the big shots as Royals crossed the 100-run by the end of 9th over. However, after the dismissal of Smith in the 9th over, all eyes were on Samson who was dismissed by Mohammed Shami in the 17th over when the Royals were requiring 63 runs, and Tetwatia was playing 17 off 21 balls.

WATCH – Nicholas Pooran Stuns Everyone With His Brilliant Save At Boundary

Cottrell came out to ball the 18th over and Tewatia smashed him for six on each and every deliver batting penultimate one. While all the sixes went towards the leg-side, only one six went over long-off and the equation came down to RR needing 21 off the last two overs.

Here is the video of the sixes: 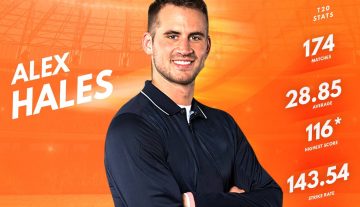