Rajasthan Royals (RR) had recently posted a motivational video of the players sweating out ahead on an important clash against Royal Challengers Bangalore in Qualifier 2 of the IPL 2022 playoffs. Under the captaincy of Sanju Samson, RR finished second in the league stage of IPL 2022 and it meant that they had an extra chance of making it to the final.

It won’t be an easy task for the Royals as this will be the first IPL game at the Narendra Modi Stadium in 2022 and Royal Challengers Bangalore have the winning momentum on their side. The Royals will be expected to stick with the same playing XI for the fixture as well despite Prasidh Krishna conceding three consecutive sixes in the last over against Gujarat Titans.

ALSO READ: Paul Stirling Amasses 34 Runs In An Over During A T20 Blast Match

Coming back to the video posted, R Ashwin alongside Riyan Parag can be seen working on their fitness while Shimron Hetmyer, Yashasvi Jaiswal, and Sanju Samson were getting into their batting grooves. The other players in the squad had all been training hard ahead of the important clash as the winner will be locking horns with Gujarat Titans (GT) in the IPL 2022 final.

The Rajasthan Royals in the previous game posted a huge score of 188 on the board On the back of Jos Buttler’s superlative 89 off 56. Skipper Samson played a good hand with a 26-ball 47 while the Gujarat bowlers failed to do much with the ball.

In reply, the Titans chased down the score with three balls to spare as the duo of David Miller and Hardik Pandya got the team over the line with an excellent partnership. Miller remained unbeaten on 68 off 38 balls while Pandya’s unbeaten 27- ball 40 helped the Gujarat side to get over the line against the Royals. Meanwhile, the winner of Qualifier 2 will face Gujarat Titans at the Narendra Modi Stadium in Ahmedabad on May 29 (Sunday). 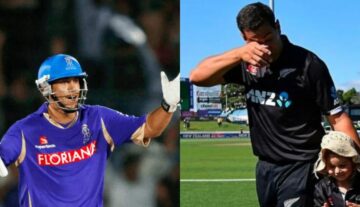