Yusuf Pathan has produced a stunning one-handed catch for Baroda in the ongoing Syed Mushtaq Ali Tournament against Goa and sent back the captain Darshan Misal on Friday. Although he failed to score and got out for a duck but kept his team in the hunt. He even out of the India squad since 2012. However, Yusuf’s brother, Irfan Pathan took to Twitter and shared the video of the catch. Soon after his tweet, Afghanistan captain, Rashid Khan, replied hilariously.

In the match, Baroda won the toss and elected to bat in Vizag. Baroda were off to a poor start as they lost both their openers very cheaply. Swapnil Singh and Deepak Hooda then stitched a 53-run stand for the third wicket. In the process, Swapnil registered his maiden Twenty20 (T20) half-century.

Baroda finished their innings at 149 for nine in 20 overs. While chasing 150, Goa also lost a couple of quick wickets but Suyash Prabhudessai scored an unbeaten knock of 60 and helped Goa win and secure four points. For Baroda, Atit Sheth picked up three wickets for 20 in his four overs.

As far as other matches are concerned from Group A, Andhra beat Bihar with a convincing 10-wicket win as they chased down 98 runs with ease and also with more than eight overs to spare. Also, Karnataka secured four points as they beat Uttarakhand by nine wickets convincingly. 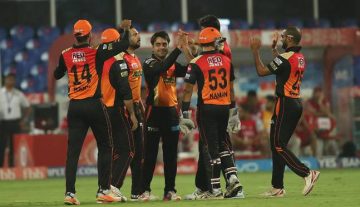