Moeen Ali was an integral part of the Royal Challengers Bangalore (RCB) in the 2019 edition of the Indian Premier League (IPL). However, in 2020, he failed to make it to the playing XI as often as he would’ve liked. Having played only a handful of matches, neither has he delivered with the bat nor has he performed with the ball. It’s uncharacteristic of him since he has loads of potential.

Ali had a job to do in the Eliminator against the Sunrisers Hyderabad (SRH) on Friday, November 6, at the Sheikh Zayed Stadium in Abu Dhabi. Representing the Royal Challengers Bangalore (RCB), he had ample time to bat as he came out to bat in teh 11th over. The Red Army had lost Aaron Finch, who scored 32 off 30 balls with three fours and one six, with the score at 56/3.

Moeen had got the company of a veteran like AB de Villiers. Though ABD wasn’t going at all guns blazing, he was squeezing out the singles to at least keep the scoreboard ticking. In the 11th over, Shahbaz Nadeem got the prized wicket of Aaron Finch and then, Ali came in to bat. In the fourth ball of the over, De Villiers patted one to deep mid-wicket for a single and it also happened to be a no-ball.

Moeen couldn’t have expected a luckier start to get going as he was facing his first ball which was a free hit. However, fate had something gruesome in store for him. Nadeem fired one in the block-hole and all Moeen managed to dig it out. It was then that something unusual happened. Ali went for the risk of taking a sharp single. However, he had to deal with Rashid Khan, who was fielding at extra-cover.

Rashid aimed at the bowler’s end with perfection. He threw the stumps down and Moeen ended up getting run-out off a free hit. It’s the only possible form of dismissal off a free-hit. Virat Kohli, the RCB skipper, from the dug-out wasn’t happy by any stretch of the imagination. Even the users on Twitter had their say on Moeen’s dismissal.

Here is how Twitterati reacted to the dismissal:

All sorts of emotions after Rashid's direct hit! 🧡

I don’t understand why #RCB take players like Moeen Ali who try to take single out of free hit and get run out in the process (only way to get out for a free hit). Bad captaincy and ineffective selection process. Lucky for #SRh #RCBvSRH

Moeen Ali gets out on a free-hit. Remember Robin Peterson getting out run out on a free hit in India's first ever T20 international at Johannesburg in 2006

That was a tactical no ball.#Nadeem

Moeen Ali has managed to get dismissed off a free hit.#IPL2020

To give away a wicket from a first ball free-hit has to be cruellest turn of fate for RCB. Moment of absolute madness from Moeen Ali.
And what a throw from Rashid Khan!

Golden Duck off a Free Hit. Only RCB could have done this in playoffs. Respect.

On Free hit you can get RUNOUT… #RCBvSRH

#SRH look such an inspired team. That throw from Rashid Khan to run out Moeen Khan…Wow! 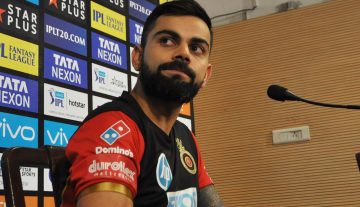