News
Rashid Khan Steps Down As Afghanistan Captain, Says Team Was Selected Without His Consent
By CricShots - Sep 9, 2021 10:55 pm
Views 194

Afghanistan leg-spinner Rashid Khan has stepped down from the captaincy of his national team just hours after the team selection for the T20 World Cup 2021 in the UAE and Oman. He has said he wasn’t consulted during the team selection process.

Rashid Khan announced his decision on Twitter just hours after the squad for the T20 World Cup 2021 was announced by the Afghanistan Cricket Board (ACB).

“As the captain and responsible person for the nation I reserve the right to be part of the selection of the team. The selection committee and ACB has not obtained my consent for the team which has been announced by ACB media,” said Rashid.

“I am taking the decision of stepping down from the role as the captain of Afghanistan T20 side effective immediately. It’s always my proud playing for Afghanistan,” he further added.

Afghanistan Cricket Board (ACB) announced the squad for the forthcoming T20 World Cup 2021 on Thursday. They picked a full-strength squad with good depth. Rashid Khan was named to lead the team but he has shocked the world with his decision. It was understood that he wasn’t happy with all the political turmoil that was happening since the Taliban took over.

Rashid wasn’t happy with the interference in everything and urged for peace to prevail in his country. 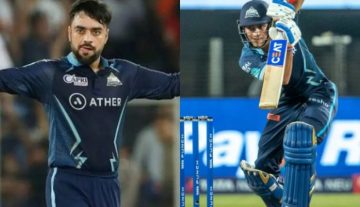 News
By CricShots - Jun 2, 2022
Rashid Khan Considered Shubman Gill As A Hard Batter To Bowl To