Afghanistan bowler Rashid Khan is developing a new ‘mystery’ variation in his bowling, but he will use it only in Test cricket. However, the key spinner has recently finished his stint in the Big Bash League in Australia and will move on to the Indian Premier League which will start from next month.

“I’m trying my best in the nets and the practice sessions to bring something new, but never bring them in the (T20) game because everything is going well there,” Rashid told cricket.com.au. “But I’m looking forward to bowling those deliveries more in the Test games. That gives me an extra opportunity because you’re bowling many more overs and there’s not so much pressure on.”

“If I bowl a bad ball there, it doesn’t matter as much as it does in the T20 game. Hopefully, next summer when we’re here (in Australia) I’ll have more control on that and then be capable of then bowling them in the T20 as well. I have to be more consistent with my line and length and just to read the game – read the wicket, read the ground, know how to bowl and where to bowl with those things. That’s what I’m focusing on,” he expressed.

Rashid Khan looked forward to playing in Australia later in the year as the T20 World Cup will be played there and that is followed by their first Test against Australia as well.

“We had the 50 overs World Cup here (Australia) in 2015 which wasn’t as good for us, but I think we have the best combination for T20s,” Rashid said. “We hope, Inshallah, we do our best in the T20s but after that, a Test game against Australia … every team finds it very tough here, it challenges you a lot to perform but, as a team, it would be a great experience for us. It’s more than a dream for the country where you came from, playing a Test match against Australia.”

“As long as we’re doing well whenever we get an opportunity to play against any team, then they will see Afghanistan is doing well in Test games, so they’ll say, ‘Let’s play a game with them’,” Rashid said.

“We still need to do lots of hard work, especially in the batting department and our fast bowlers – that’s the two departments we need to work on more. But as long as we’re doing well whenever we play, that will determine how many games we get regularly. If we play like five, six or seven Test games in a year, that would be something important for us,” Rashid Khan added.

“Right now, we’re only playing one in a year which doesn’t allow you to get much experience. But even if we get just one or two in a year, we have to use them and we have to perform as good as possible to put in the mind of other teams that this team is capable of playing five-day cricket, and they can give you a tough challenge,” Rashid Khan concluded. 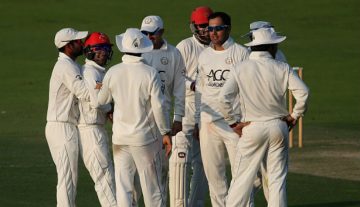 Article
By Sandy - Jun 11, 2018
Five Afghanistan cricketers who can inspire the nation in their upcoming maiden Test