South Africa and India are locking horns with each other in the ongoing second Test match at The Wanderers Stadium, Johannesburg. The hosts have been able to make some early inroads in the Indian batting line-up to take command of the game so far. However, amidst the ongoing match, something that has caught the attention of the fans as Rassie van der Dussen took a brilliant flying one-handed catch.

After winning the toss, the stand-in Indian skipper, KL Rahul decided to bat first in the second Test match. Virat Kohli has missed the game owing to an upper back spasm. Thus in his absence, KL Rahul has been given the responsibility to lead the side. Hanuma Vihari on the other hand made the cut in place of Kohli.

ALSO READ: Reason Behind Shreyas Iyer Being Available For The Johannesburg Test

After Mayank Agarwal departed with 26 runs to his account, India suffered two quick wickets in Ajinkya Rahane and Cheteshwar Pujara. Both the experienced batters failed to make a larger impact on the game as they walked back to the pavilion rather cheaply. Rahul and Hanuma Vihari was looking strong in the middle and provided some stability to the team’s batting unit before Kagiso Rabada sent the latter back to the pavilion.

South Africa’s prime fast bowler, Kagiso Rabada finally received his first wicket for the day. Some extra bounce from the pacer reaped his reward as he was able to break the partnership which was looking pretty decent for India. He bowled a back-of-length delivery which Vihari was looking to defend.

ALSO READ: Umpire Gives A Warning To KL Rahul For Pulling Out Late Against Rabada

However, the ball came off his gloves and went on to Rassie van der Dussen who was placed at the short leg. He leaped towards his left to complete a flying one-handed catch. Earlier in the day, Temba Bavuma had dropped Vihari’s catch but this time around the batter had to depart. Here is the video of the dismissal:

What a superb close-in catch that was from Rassie van der Dussen to dismiss Hanuma Vihari! #SAvIND pic.twitter.com/SB0DURelNO 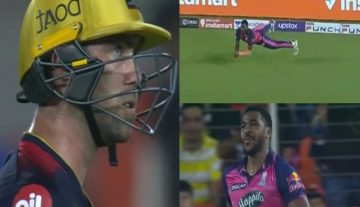