One of the perks of not having a crowd at the cricket venue is the stump microphone picking up even the smallest of conversations. In the first Test at Centurion, the Indian skipper, Virat Kohli came up with a couple of gems during the course of the match, and on Day 1 of the 2nd Test in Johannesburg, it was KL Rahul, who received a warning from umpire Marais Erasmus and it was clearly audible as stumps microphone caught it pretty finely.

During the fifth over of the Indian innings, after Rahul won the toss and opted to bat, the stand-in skipper pulled out pretty late to a ball from Kagiso Rabada. Bowling the third ball, Rabada came steaming in but Rahul decided to pull out, the South Africa pacer had to stop at the last moment.

By the looks of it, KL Rahul was not ready to face as the batter kept tapping the bat looking at the ground. However, Rahul quickly apologized for it but Erasmus felt a warning wouldn’t do any harm. “Just try and be a little quicker please KL,” the stump mic caught Erasmus as saying, to which Rahul quickly said “Sorry”.

Marais is a sweet guy #INDvSA. As is the stand-in captain pic.twitter.com/KVQNqUPt06

At the lunch interval on Day 1, India was reeling at 53/3 with Rahul and Hanuma Vihari the two unbeaten batters. India’s opening pair of Rahul and Agarwal managed to add 36 runs before the latter edged Marco Jensen to Kyle Verreynne for 26. Cheteshwar Pujara and Ajinkya Rahane’s sorry form continued as the batters were dismissed off successive balls from Duanne Olivier. Pujara was out for 3 before Rahane fell for a golden duck.

ALSO READ: Sanjay Manjrekar Compares India’s Seam Attack With That Of Pakistan’s In the Late 90s

KL Rahul is leading the Indian Test team in place of Kohli, who is missing the second Test of the series due to an upper back spasm. The opportunity means that Rahul is the first Indian captain since Mohammad Azharuddin in 1990 to lead the team in Test cricket before doing so in limited overs internationals. 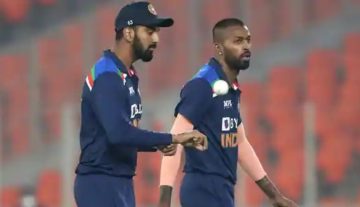