On Thursday, the veteran Indian spinner Ravichandran Ashwin is celebrating his 34th birthday and wishes have poured in from the cricket fraternity and beyond on the cricketer’s birthday. The Board of Control for Cricket in India (BCCI) shared a video link to Ashwin’s seven-wicket haul against South Africa in the 2019 Test series.

On the other hand, Ashwin’s Indian Premier League (IPL) franchise, Delhi Capitals tweeted, “Us trying to pick one adjective for Ashwin is like batsmen trying to pick his variations. Keep bamboozling us all with your skill, wit, and intellect.”

Happy birthday to our very own @ashwinravi99. 👏🎂

Here's an Ashwin classic you can relive on his special day. 📽️👇

Keep bamboozling us all with your skill, wit, and intellect 🧠🏏

The Indian players also shared their wishes for the off-spinner on social media. His teammate, Ajinkya Rahane had tweeted, “Happy Birthday, Ash! Here’s to more fun times and getting in rhythm together.” Rahane also a picture of himself, Ashwin and Shikhar Dhawan posing in Delhi Capitals jersey.

“Happy [email protected]!! Wishing you happiness and good health, have a great day!” tweeted Ishant Sharma along with a picture clicked with Ashwin with the Burj Khalifa in the background.

Happy Birthday, Ash! Here’s to more fun times and getting in rhythm together 😁 pic.twitter.com/exmwRS0Ypw

Other past and present cricketers, including Hanuma Vihari, Aakash Chopra and Wasim Jaffer also wished Ashwin. Here are some other tweets:

Wish you many happy returns of the day @ashwinravi99. Wishing a year full of wickets except against @lionsdenkxip 😉#IPL2020 pic.twitter.com/BqVK3BBdjB

Here’s wishing one of India’s greatest match-winners in Tests a very happy birthday 🥳 Have a good one, @ashwinravi99 😇

He tempts the batsman to leave his crease at the striker's end. And forces him to stay behind it at the non-striker's end! Wishing @ashwinravi99 a very happy birthday and lots of work for those fingers this year

Ashwin was active on social media, replying individually to all these messages. Recently, Ashwin has gone on to reveal his conversation with the Delhi Capitals (DC) coach, Ricky Ponting over the controversial ‘Mankading’ mode of dismissal in a video on his YouTube channel.

Recalling the video, Ashwin said,  “The conversation between both of us over the run out at the non-striker’s end. The moment I did that, Ricky, you said, even if you ask me, I will have the point of justification. To be honest, I am a serial sort of a runout guy at the non-striker’s end. I started at the age of 12 because I couldn’t take the batsman taking those extra yards. And the moment I did that, the spirit of cricket was brought into play.” 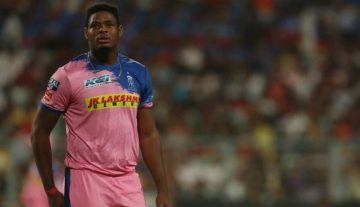 News
By CricShots - Feb 18, 2020
Oshane Thomas Encountered In A Car Accident In Jamaica