A funny event took place during the game between Chennai Super Kings (CSK) and Royal Challengers Bangalore (RCB). The incident took place between all-rounder Ravindra Jadeja and umpire Anil Chaudhary, who was officiating the game on Friday in Sharjah. On the fourth ball of the 11th over, Jadeja darted down a faster delivery outside the batsman, Devdutt Padikkal’s off-stump.

The RCB opener, as he was looking to increase the momentum and preparing for a slog on the leg side, moved across his off-stump. With the delivery still going wider, PAdikkal decided to leave the ball at the last moment retracting his cut shot. To his surprise, umpire Anil Chaudhary didn’t deem it a wide – because he had moved across his off-stump.

On the way back to his bowling mark, Ravindra Jadeja, impressed by this decision of Chaudhary, patted him twice on his back, showcasing his appreciation for the umpire. Here is the video of the incident:

After being put in to bat first, Virat Kohli started off the innings with two boundaries on the first couple of balls against Deepak Chahar. Devdutt Padikkal followed with a couple of boundaries of his own. The pair started to unleash their shots as both hit their first sixes and capped off the powerplay at 55/0.

ALSO READ: Aakash Chopra shares his views on the CSK vs RCB game

With each over and each boundary, the partnership surpassed the 90-run mark with both batting in the 40s, at a strike rate close to 150. Both the batsmen raised their respective fifties, however, Kohli had slowed down by then and eventually lost his wicket to Dwayne Bravo, caught by Ravindra Jadeja in the deep.

However, RCB came down from 111/0 turned to 150/4 as AB de Villiers, Padikkal and then debutant Tim David lost their wickets – all caught out – while attempting big shots. 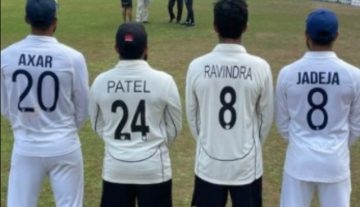 Social Shots
By CricShots - Dec 6, 2021
Axar And Jadeja Recreates Their Names With Ajaz And Rachin