Indian all-rounder Ravindra Jadeja was omitted from the 16-member squad against Australia in the ODI series. In ICC Test rankings, Jadeja stands at number 2 as he is only behind James Anderson.

When Australia came to India last time, Jadeja was the pick of the bowlers, but this time he along with ace spinner Ravichandran Ashwin has been ignored from the squad that will take on Australia from September 17, 2017.

Twitterati also lashed out on Indian selectors over the exclusion of the stalwarts. It can be understood that Ashwin was not picked because as he is finishing his County stint. But Jadeja’s omission still can’t be justified.

Speaking about Ashwin and Jadeja’s omission, Chairman of selectors MSK Prasad said: “The team for the three ODIs against Australia has been selected in line with the rotation policy of the Board and accordingly R Ashwin and Ravindra Jadeja have been rested.”

According to what Jadeja’s latest tweet suggests, it seems that he is unhappy with BCCI, but he was quick to delete the tweet. His post read: “Make your comebacks stronger than your setbacks #rajputboy”. 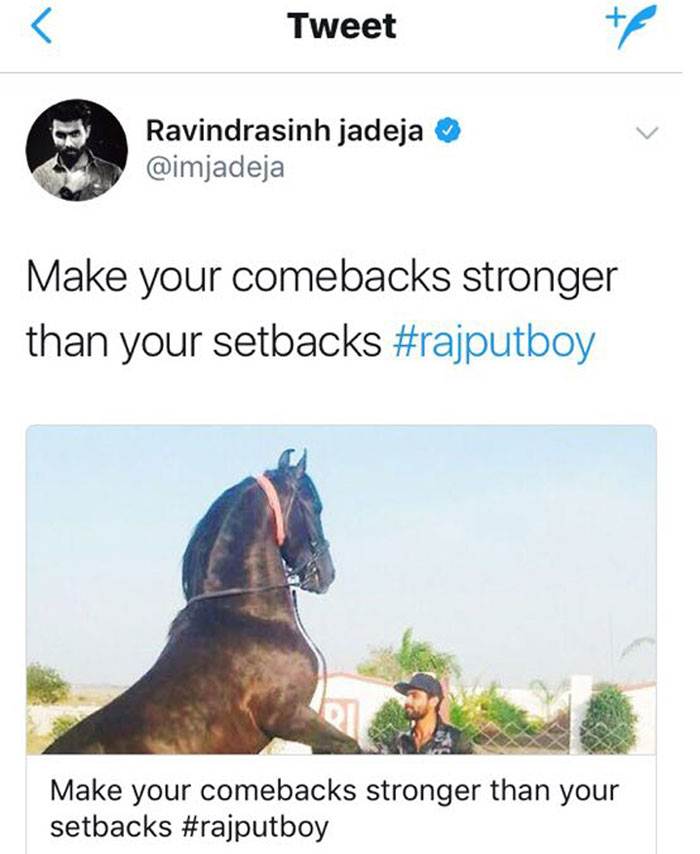 It seems Jadeja is pretty angry aand releasing his frustration on BCCI in the most subtle manner. Australia will be isiting India for 5 ODIs and 3 T20Is and the tour will last nearly a month.