Often an underated art in those times, wrist spinners would one day dominate the world was never thought of. The Australian lad, had been criticised and tagged ‘good for nothing’ when his wrists hardly turned the ball to have an impact on the game. The 11 test matches old Warne, in this first test in the 1993 Ashes series was bought on after England were 80 for the loss of one wicket and their number 3 batsman, Mike Gatting was just new to the crease.

The pitch at old trafford had a history of helping spinners and thus a little roughness to the ball made Allan Border hand the task of bowling to Shane Warne. It was his first ball of that match. His long slow runup and suttle windup to the crease was a bit long for a spinner in general. As he approached the crease, Warne’s massive hands (which he effectively used as a successful slip catcher over the years) grabbed the ball and his arm delivered the ball. The ball with an angle from over the wicket was pitched outside Gatting’s leg stump, and was heading towards leg side further. It was obvious it was a wide ball and even if it spins, it wasnt going to do much damage as Gatting had covered it well. However, Warne had this art of delivering the ball with an extra rip to it, giving that extra impectus, that extra energy. The ball gripped the Old Trafford wicket. It not only spun but also spun with pace. Gatting was unable to second guess it. The ball went past the bat and also Gatting’s whole body to hit the top of off stump. Wicket keeper Ian Healy was equally amazed at this ripper from Warne as he too was initially going down the leg side to collect the ball.

The ‘Gatting ball’ which is famously known as the Ball of The Century is one of the most viewed and talked about Cricketing incidence over last two decades. In the 2006 Ashes series, the dismissal of Andrew Strauss while trying to pad a widish off side ball made him lose his stumps with the spin and rip of Warne, made the cricketing fraternity compare it to that 1993 Gatting wicket.

In recent years, Devendra Bishoo, the West Indian spinner bowled a similar delivery to Australia’s Brad Haddin in a test match in June 2015. This lead to Bishoo’s delivery termed as the recreation of The Ball of the Century by many cricket followers. The coincidence being Bishoo bowled that delivery exactly 22 years later after Warne’s magic on the same day, 4th June 2015.

Many spinners came and went, but it was Shane Warne who amazed the world with his continuos performance with the ball. The historical magic ball still relishes old memories of many. Warne went on to become the first ever bowler to take 700 wickets and has only Muralidharan ahead of him. Even after so many years, Gatting is more popular for his dismissal than his batting. While Gatting celebrates his birthday on 6th June, each year just two days before, the world remembers him for getting his stumps castled by Warne.

Tags Ball of The CenturyDevendra Bishoo 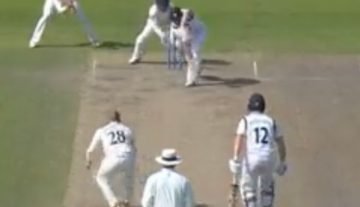 Videos
By CricShots - May 12, 2022
Matt Parkinson Recreates Shane Warne’s Ball Of The Century In A County Match