Zimbabwe locked horns with the Netherlands in the Super 12 clash of the ongoing T20 World Cup 2022 at the Adelaide Oval. Wicketkeepers play a crucial role behind the wickets, however, Regis Chakabva failed to fulfill his duty on Wednesday with hilariously sloppy glove work giving a lifeline to Bas de Leede who had already given up.

The Netherlands registered their maiden win of the Super 12 as they defeated Zimbabwe by five wickets. The latter’s batting disappointed immensely but a sloppy fielding moment amused the spectators even more in the closing stages of the game. The Netherlands chased down the target with relative ease and the game was becoming monotonous towards the ending stages when a moment in the 18th over sent spectators into splits.

Bas de Leede was facing Sean Williams on the second ball of the over and he decided to smash the ball to get over the line with a big shot. The batter walked down the track to take a swing but completely missed the line of the ball.

Regis Chakabva had a simple opportunity to stump the batter out but he made a complete mess of chance. The wicket-keeper suffered a series of fumbles, jumbling the white Kookaburra thrice. Chakabva first failed to grab the ball cleanly and then the ball slipped from his grasp again when he tried to direct it toward the stumps.

The Zimbabwean finally collected the ball, as it was rolling away, but even then wasn’t able to disturb the stumps. Bas de Leede was well inside his crease by this point and eventually finished off the game with a boundary while advancing down the track once again.

Here is the video of the triple fumble from Regis Chakabva:

The netizens reacted in all sorts of ways to the triple fumble by Regis Chakabva that saved Bas de Leede’s wicket.

Oh, before the match ended, there was a curious event.

Regis Chakabva had ages of time but couldn't complete the stumping. Bas de Leede had even taken a step or two back to the pavilion!

It has gone all downhill for Zimbabwe after that great win against Pakistan. From a possible semifinal berth in sight, they are now scraping with Ireland for direct qualification for the 2024 edition.#ZIMvNED

Regis chakabva has to stop playing for zimbabwe, hasn't been convincing behind the wicked nor in front of it

Regis Chakabva has also been poor.

Milton Shumba & Regis Chakabva haven’t contributed anything with the bat, I would have loved to see Marumani and Kaia in this team. @ZimCricketv @CricStats36 #T20WorldCup

First win for Nederlands in this T20 World Cup. They beat Zimbabwe by 5 wickets. 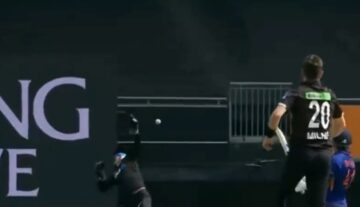 Twitter Reaction
By CricShots - Nov 25, 2022
Tom Latham Gives A Lifeline To Shreyas Iyer As He Mistimes His Jump