South Africa has finally gets the sweet taste of success in the One-Day International series by defeating India in the Pink ODI by five wickets (DLS method). With this win, SA maintained their unbeaten streak in Johannesburg’s Pink ODIs and keep the ODI series alive. 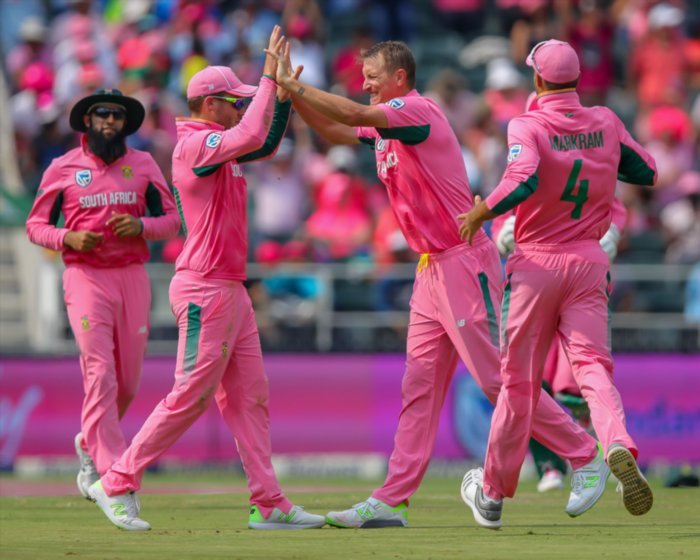 Chasing 290, South Africa was off to a good start but Jasprit Bumrah’s lethal incomer plumbed Aiden Markram in front. With this wicket, umpires sent players off the field minding the risk to hit by the lightning and it brought rain as well. After a break for almost two hours, umpires decided to cut this game short to 28 overs and asked SA to chase 202 down.

Hashim Amla made a handy contribution of 33 while AB de Villiers left his team in dire situation after showing some intent. South Africa was following the same path against wrist spinners, but then luck went in favor of David Miller, who got reprieve twice inside one Yuzvendra Chahal over. First Shreyas Iyer put him down, but then Chahal cleaned him up but on a no-ball.

These chances inspired Proteas to punish Indian bowlers and they did it quite comfortably. Miller scored quick fire 39 but it was Heinrich Klaasen, who turned the match by his clean strikes. He remained unbeaten on 43 in 27 balls for his man of the match performance, which featured five fours and a solitary six. Andile Phehlukwayo came to finish the things after Miller’s departure and entertained the crowd with his 5-ball cameo.

Phehlukwayo finished the match by two consecutive sixes and remained not out on 23.

India’s writs spinners were unable to control the wet ball and went for cleaners, which proved decisive in this game. Now the focus will turn to Port Elizabeth, where both teams will play the fifth ODI on Tuesday.