The young Indian wicket-keeper, Rishabh Pant might have faced some harsh criticisms in the fourth ODI against Australia on Sunday. Despite those criticisms, he continues to be a popular youth icon of the country. The 21-year-old has been roped in to encourage voters in Delhi to come out and vote in the upcoming Lok Sabha election, along with Manika Batra, the 23-year-old table tennis player from Delhi.

Delhi’s Chief Electoral Officer (CEO) Ranbir Singh informed about the same on Monday. India will see a seven-phase election kicking off on April 11. The two youngsters are set to spread awareness about the upcoming election through radio and video messages, Singh said in a press conference.

Delhi has seven Lok Sabha seats and all of them will vote on May 12. The results will be declared on May 23. In 2014, the ruling Bharatiya Janata Party had won all the seven seats in the capital. Describing the same, Singh said, “The sports icons have been roped in to spread awareness among the voters. Our effort will be to increase the total vote percentage this year from last time’s 65.02 percent.”

This time, Delhi has 1.39 crore voters of which 62,35.814 are women and 647 transgender people, the CEO said. He also told the media persons about mobile applications like the PwD app and the C-vigil app that can be downloaded to apply for PWD (persons with disability) voter cards, report violations of Model Code of Conduct, among others.

However, Pant received a lot of flak for his glovework in Mohali and he clearly failed to beat the nervous energy. Pant missed stumping and run-out chances and was slammed on social media. His failed effort to imitate the veteran MS Dhoni by trying to effect run-out without seeing the stumps added fuel to the fire. Rishabh was picked ahead of the experienced Dinesh Karthik for the ODI series but his show in Mohali could now put his chances of playing in the showpiece event in a spot. 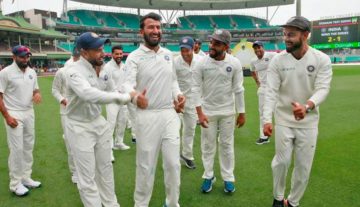