The young Indian wicket-keeper-batsman Rishabh Pant is known for his antics on the field and he often gets in the news for his murmurs from behind the wickets and keeps his teammates entertained with his funny comments. He is also known for his swashbuckling batting even in the toughest of situations but is also criticized for his approach for attacking when the team needs him to hang around in the middle.

On Day 4 of the ongoing Headingley Test, he had to come out to bat in a hurry with India suffering another collapse against the second new ball. The likes of Cheteshwar Pujara, Virat Kohli, and Ajinkya Rahane looked vulnerable facing the disciplined bowling of England and Rishabh Pant found himself in the middle in the first 45 minutes of the day itself.

WATCH – Virat Kohli Got Out Repeating A Similar Mistake In Leeds

The fall of quick wickets might not have given him enough time to correct the mistakes. Probably for the same reason, Rishabh Pant has seen shadow batting at non-striker’s end hilariously and didn’t know James Anderson was already into his run-up. In the end, the southpaw had to rush and get himself in the line to concentrate on the delivery.

Meanwhile, Rishabh Pant also joined the collapse in the second innings as he scored only a solitary run before edging one to the slip. It has been a tough series for the wicketkeeper-batsman after the highs of Australia tour and the home series against England. He has so far scored only 87 runs in five innings and has been found wanting against the moving ball much like the other batsmen in the team.

Rishabh Pant will have to approach Test cricket in a better way now and will be under pressure after poor returns in the ongoing series. The only other wicketkeeper in the Indian squad is Wriddhiman Saha who is yet to play a game on this tour as he even missed out on the World Test Championship Final against New Zealand. 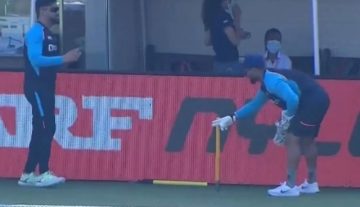