After having completed the mandatory 14-day quarantine in Sydney, the veteran Indian opener, Rohit Sharma has finally the touring party in Melbourne ahead of the next couple of Tests in Sydney and Brisbane. Sharma joined the squad on Wednesday (December 30) and he was welcomed in the warmest possible way by his Team India teammates.

The official Twitter handle of the BCCI posted the video in which Rohit Sharma can be seen hugging his teammates one by one. The video ends with head coach Ravi Shastri jokingly inquiring the opener about his quarantine experience. Captioning the video on Twitter, BCCI wrote: “Look who’s joined the squad in Melbourne 😀 A warm welcome for @ImRo45 as he joins the team 🤗 #TeamIndia #AUSvIND”.

Look who's joined the squad in Melbourne 😀

A warm welcome for @ImRo45 as he joins the team 🤗#TeamIndia #AUSvIND pic.twitter.com/uw49uPkDvR

It has been a long time since Rohit Sharma has played a game for India across the formats as he played his last international match way back in February 2020 during the T20I series in New Zealand. He was slated to make his comeback during the home ODI series against South Africa in March but it was called off due to the onset of the Covid-19 pandemic. Then, to make matters worse, Rohit picked up an injury during the IPL and he had to miss significant games on the Australian tour.

Rohit made a comeback to competitive cricket for the Mumbai Indians playing 11 after missing a few matches and even scored a half-century in the final against Delhi Capitals. After the IPL he came back to the NCA, while the entire Indian squad traveled to Australia. However, there was no clarity regarding Rohit’s injury status and also on his departure to Australia.

The Indian skipper, Virat Kohli also lamented on the lack of clarity on the eve of the ODI series, post which the BCCI released a statement that said that Rohit will be undergoing another test at the NCA on December 11, and depending on the results, a decision will be taken, effectively ruling him out from the first two Tests.

ALSO READ: Ajinkya Rahane Gets Featured On The Honors Board Of MCG

Rohit subsequently passed the fitness test and within a few days boarded a flight to Australia where he immediately went into 14-day isolation in Sydney. Rohit Sharma is expected to slot-in back in the playing 11 and it will be interesting to see who makes way for the ‘Hitman’. 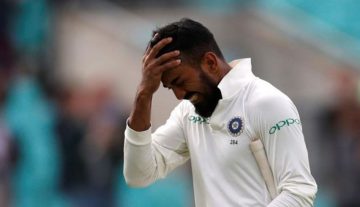 Twitter Reaction
By CricShots - Dec 6, 2018
Twitterati Lashes Out On The Indian Batsmen For The Shot Selection