Team India has been on a winning spree ever since they have witnessed a disappointing exit at the T20 World Cup 2021. They won two T20I series in a row following the tournament, both at home, under their new skipper, Rohit Sharma, and now stands on the verge of winning another when they take on Sri Lanka in the second T20I of the three-match series in Dharamsala. But besides a series win, the match offers Rohit a chance to script a magnificent T20I world record.

Rohit Sharma has led India to 15 wins in 16 matches at home in the format, placing him presently tied with England’s Eoin Morgan and New Zealand’s Kane Williamson. However, a win in Dharamsala will mean Rohit will become the T20I captain with the most wins in the shortest format at home. Among Indian skippers, Rohit has two more wins than Virat Kohli and five more than MS Dhoni, at home.

ALSO READ: Pink-ball Test Between India And Sri Lanka To Have 50% Crowd

Overall, Rohit Sharma has 22 wins in 24 matches as T20I captain in his career. The win would also guarantee not just an 11th successive win for India under his captaincy, but also a third consecutive series win since becoming a full-time T20I captain in November 2021.

On the personal front, Rohit Sharma also stands 19 runs short of completing 1000 runs as T20I captain. He had the opportunity of equalling Babar Azam’s record of being the fastest to reach the milestone as captain but was dismissed for 44 in his 26th innings, now leaving him a chance for the second spot.

However, Rohit Sharma will still have the chance of becoming the fastest Indian skipper to reach the milestone, surpassing Kohli, who had taken 30 innings while Dhoni was the slowest among all captains, having reached the feat in 57 innings. The second T20I match will be played on February 26 and the final will be on February 27, both at Dharamsala. 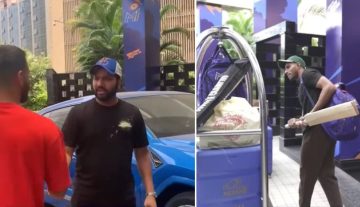 IPL 2022
By CricShots - May 26, 2022
Tilak Verma Manages To Steal Rohit Sharma’s Bat While Leaving The Hotel