Rohit Sharma and KL Rahul provided India with a good start during the final session of day two but the job was still not done. India were 56 runs behind when day three started and the match could’ve gone either way.

But both openers were firm with their technique and shared 83 runs for the opening wicket. KL Rahul got out after scoring 46 runs but Rohit Sharma remained composed and solid with his batting. He found a good ally in Cheteshwar Pujara.

Pujara was batting with intent in the second innings and scored boundaries every now and then. Both batsmen took India into the lead and played some fine shots. Rohit, in the process, notched up his first overseas Test hundred with a six over long-on off Moeen Ali.

Rohit was looking to up the ante and England were looking clueless against his batting. They shifted the plan and started bowling bouncers to both batsmen. And Rohit fell in the trap as Ollie Robinson found his top edge which settled in Chris Woakes’ palms.

Cheteshwar Pujara, who scored his fifty by then, got out in the same over and gave England a sniff to make a comeback. Virat Kohli and Ravindra Jadeja tried to steady the ship after consecutive wickets. Jadeja yet again came out to bat at number five and remained composed during his stay at the crease.

The bad light forced the play to be stopped and it eventually resulted in the stumps of day three. Virat Kohli (22) and Ravindra Jadeja (9) are batting in the middle with India’s total being 270/3 and they are leading by 171 runs.

The new ball is only 12 over old and will still be fresh when day four resumes. Hence, India will have to negotiate the first passage of the play without much damage.

Excellent innings. Great timing with shots. Not so much with the dismissal. Maybe we grow greedy. #RohitSharma

Rohit says when the opportunity to open came he grabbed it.
He has repeatedly told me how keen he is to make a difference in red ball cricket. Again outstanding innings from an outstanding cricketer. The adaptability stands out.@ImRo45

Brilliant knock by @ImRo45, what a hundred that to when India needed it the most! #ENGvsIND

Rohit Sharma has been building for a while to that first test century outside India. Hard work and discipline paying off.

Indian batsmen reaching their hundred with a SIX on most occasions in Tests:

In the age where the shorter formats bring greater fortunes and glory, Rohit Sharma’s refashioning of his game to succeed as opener in the toughest condition is a huge tribute to Test cricket. 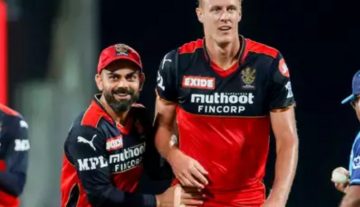