In the video making rounds on social media, Sachin Tendulkar was heard asking Imran, “How did we win the game today? He (Pathan) went and hit [tup tup tup] sixes. That’s why we won.” And the caption of the video was “And that’s how we won the game!”.

Batting first, Australia Legends witnessed a flying start as they made an opening partnership of 60 runs as skipper Shane Watson played a blistering knock of 30 in just 21 balls. For India Legends, their spinner Rahul Sharma churned out a crucial breakthrough in the eighth over to dismiss Watson and break the crucial partnership.

Ben Dunk carried forward the momentum and played a fiery knock of 46. However, Dunk’s innings came to end in the 16th over as Abhimanyu Mithun sent him back to the dressing room. With Cameron White’s 30 off 18 balls, the Aussies finished with a defendable total of 171. Mithun and Yusuf Pathan picked up two wickets each in the game.

India Legends, during the run chase, suffered an early blow with the dismissal of Sachin Tendulkar, who departed in the sixth over. India’s other opening batter Ojha was in sublime form in the game and forged two crucial partnerships with Yuvraj Singh and Irfan Pathan. Ojha’s innings comprised seven boundaries and five sixes.

ALSO READ: Suresh Raina Will Be Playing For Deccan Gladiators In The Abu Dhabi T10 League

Irfan’s arrival eventually proved to be decisive for India Legends. The all-rounder smashed a couple of boundaries and four sixes to score 37 off just 12 balls. Pathan and Ojha stitched a 50-run partnership to guide India Legends to a thumping semi-final victory. The second semi-final between Sri Lanka Legends and West Indies Legends will be play today. The summit clash of the tournament is scheduled to take place on Saturday in Raipur. 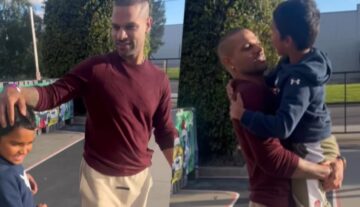 Videos
By CricShots - Nov 19, 2022
Shikhar Dhawan Had A Heartwarming Meeting With His Son