Test-saving centuries are an unknown phenomenon these days, but the batting legend, Sachin Tendulkar carved out one such a knock exactly 30 years ago, the seeds of which were planted during one afternoon in Sialkot, eight months ahead to that gloomy Manchester day. It was on August 14, 1990, that Sachin amassed his maiden century in Test cricket, a majestic 119 not out on a fifth-day track to save the game for India.

Talking about the same during a chat with PTI, Sachin said, “I scored that 100 on August 14 and next day was our Independence Day, so it was special. The headline was different and that hundred at least kept the series alive till next Test at the Oval. The art of saving a Test match was a new experience for me.”

Sachin also revealed that he once batted with a “bloodied nose” and a blood-soaked jersey after being hit by Waqar Younis and saved teh game for India.

Recalling the Sialkot Test, Sachin said, “In Sialkot where I got hit and scored 57, we saved that Test match, too, from 38 for 4. Waqar’s bouncer and playing through pain defined me. After that kind of hits, you are either stronger or you are nowhere to be seen.”

As scary as it may seem now, Tendulkar, in the first innings of that Manchester match, suffered a huge blow on the back of the head by one of the fastest pacers in the world back then, Devon Malcolm. Talking about the injuries, the legendary batsman said his coach Ramakant Achrekar prepared him for all sorts of pain by making him play on the same pitch for 25 days straight at the Shivaji Park Gymkhana.

Talking about the same, the shots that Sachin remembers are the exquisite backfoot cover drives off Chris Lewis deliveries that darted in.

Legendary batsman recalled, “Lewis bowled sharp inswing and throughout my career, backfoot cover drive had been my favorite shot. The bowler who was the best by far in that series was Angus Fraser. He had a beautiful late outswing, high arm action, so the ball would bounce and move so late that you had to play at it. It was a case of showing patience and credit to Manoj that we had a 160-run stand.” 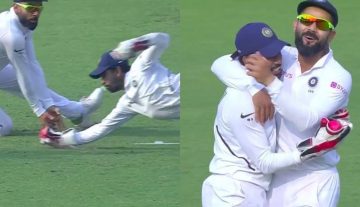