Due to the coronavirus outbreak across the world, the Indian Premier League 2020 (IPL) and all other cricketing events have either been suspended or postponed for an indefinite period. However, MS Dhoni has already planned what he will be doing in his extended break from cricket. During an Instagram live session on Chennai Super Kings’ official page, Sakshi said that Mahi and the rest of the family would be heading to the hills where they will be staying in a small village if cricket doesn’t witness resumption.

During a candid chat with Rupha Ramani, Sakshi said, “If there is no cricket post lockdown then Mahi and I have planned to hit the hills, go to Uttarakhand.”

Talking about MS Dhoni’s worst hairstyle and Sakshi said that she was lucky to have not met him during his long hair days. She further said that had she met him back then she “wouldn’t even have looked at him”. Her reply came when the TV presenter showed her an old picture where Dhoni had long hair. To which she said it was the picture of a shoot.

Explaining it further, Sakshi added, “Luckily I didn’t see him with long hair. Because if I had seen him with that oranged-long hair, I wouldn’t have even looked at him, you know there has to be some aesthetics you know. To John (Abraham) it sort of suited him but on Mahi that long hair and on top of that orange color was like.”

When asked which hairstyle she thinks was the worst Dhoni ever had, Sakshi said: “That orange hair which I saw luckily after I got to know him. After I fell in love with him, I saw his orange hair which was fine. I was like thank God, I only saw him with short hair.”

Sakshi even threw light on how she met Dhoni for the first time, and it was exactly like what they had shown in MS Dhoni’s biopic.

Dhoni’s wife explained, “It was the last day of my internship at Taj, and he seemed to be a very regular guy, like very normal. At the time, I didn’t use to follow cricket that much those days. But I just knew there was a ‘Pahadi guy’. He has got long hair, and he is a hulk. And my mom she was a fan of him and when I met him I told Mumma that he doesn’t have long hair.” 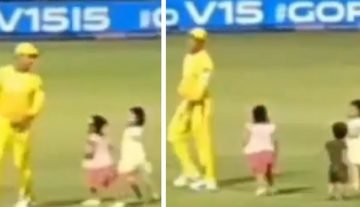