Former Pakistan captain Salman Butt stated that Rohit Sharma and KL Rahul will open the batting for India even after Ishan Kishan’s stunning knock against England in the warm-up game in Dubai on Monday. Notably, Kishan opened the innings with Rahul in India’s first warm-up match where he smashed 70 off 46 balls.

Meanwhile, KL Rahul made a quickfire 51 off 24. The duo added an opening stand of 82 in 8.2 overs as India chased down a target of 189 with ease, registering a win by seven wickets a swell. Despite Kishan’s brilliant innings, Butt opined that India will open the inning with the Rohit-Rahul opening pair.

While discussing India’s batting order for the T20 World Cup 2021, he stated: “Rohit Sharma and KL Rahul will open, I don’t think that will change. Ishan Kishan can bat one down or in the middle-order or after Virat Kohli. He is in amazing form and can bat anywhere in the batting order.”

He continued: “I haven’t seen him in any kind of trouble either against the new ball or against the spinners. These are very good signs because he played Moeen Ali very well. Adil Rashid is a very good leg-spinner and he attacked him in rather impressive fashion. As an opener, he was confident against the fast bowlers as well.” 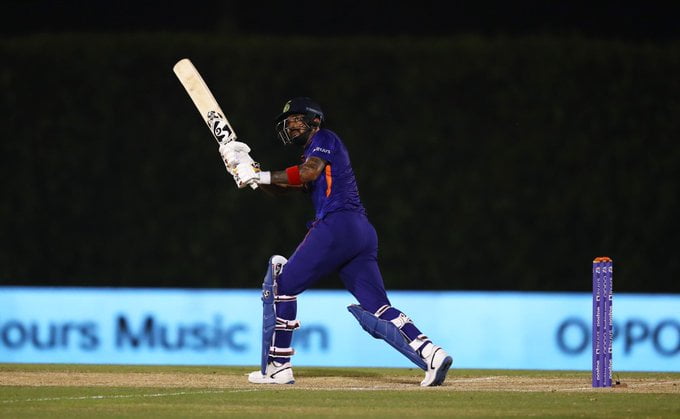 However, Ishan Kishan retired on 70 after which Rishabh Pant (29 not out) and Hardik Pandya (12 not out) took India to the finish line in the penultimate over. Meanwhile, India will begin their T20 World Cup journey against arch-rival Pakistan on Sunday.

Analyzing KL Rahul’s batting, Salman Butt said: “The highlight of India’s batting, according to me, was KL Rahul’s knock. If anyone wants to watch beautiful batting, they must watch KL Rahul bat. The way he took on England’s bowlers, it seemed like he was batting against a bowling machine. He was able to hit the ball anywhere at his will. The standout aspect of his innings was that most of the shots he played were correct strokes. The kind of shots he played demonstrated the dangerous form that he is currently in.”