England wicket-keeper batsman Sam Billings is quite sure that former Indian skipper, MS Dhoni will be raring to go in the Indian Premier League (IPL) 2020 which is scheduled to be taking place in the UAE from September 19, provided it gets a go-ahead from the Indian government. Billings that Dhoni’s experience will help him prepare and get ready for the IPL despite the fact that the latter hasn’t played any competitive cricket for more than a year and has been in lockdown due to the novel coronavirus pandemic.

MS Dhoni has not played any competitive cricket since the 2019 World Cup as he took a sabbatical post the quadrennial tournament. Dhoni was preparing for the IPL 2020 as he joined a CSK training camp in Chennai in March before it was called off due to the pandemic.

Talking about Dhoni during a chat with Cricbuzz, Billings said, “Obviously we have all had a layoff with this (pandemic) and I also had my injury last year. But for me, I think that’s the benefit of franchise tournaments that you, as an individual have to get ready, whether it’s a week or maybe two weeks, very short notice you have to prepare for a tournament that’s upcoming. He will absolutely be raring to go and I think, like anything in that role, you get better with age and experience does really help.”

Billings witnessed a successful comeback to international cricket on Thursday as he played a crucial knock of 67 not out against Ireland in the 1st of a 3-match ODI series in Southampton. Earlier, he had pulled out of the IPL auction and said he would focus on county cricket and CSK had also released him ahead of the auction in 2019.

Stressing that he learned a lot under MS Dhoni during his 2 years at CSK, Billings elaborated, “I absolutely loved my 2 years at CSK. The success in which the environment had consistently over time is unmatched really, probably only Mumbai has been as consistent as CSK. For me, that experience from those great players… the overseas guys but also the homegrown Indian stars.There is no one better than MS to learn from.”

ALSO READ: Emirates Cricket Board Willing To Have Some Crowd In IPL 2020

He further elaborated, “He is a big Man United fan which really helps, as am I. He always invited me when there’s a few Man United fans around. So whenever the game was on, we used to go to his room and watch there. It was pretty cool just to talk about cricket and learn of him. For me, as well, my third year of captaincy at Kent, I think that’s the most incredible thing… how he talks to his players, especially the young players.” 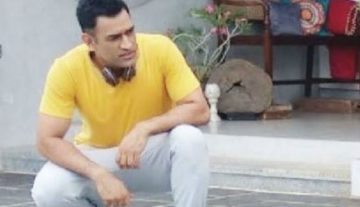 Article
By CricShots - Aug 3, 2018
MS Dhoni Is Busy Shooting During His Time off Cricket