Team India is currently hosting Sri Lanka in the opening game of the three-match T20I series at the Wankhede Stadium in Mumbai. The Indian wicket-keeper batter, Sanju Samson has a big fan base in India and there have often been social media campaigns promoting his inclusion as a regular member of the Indian team in T20Is.

However, Sanju Samson missed out on another opportunity to score big in his career with poor shot selection immediately after the opposition dropped his catch. The Sri Lankans bowlers didn’t allow the Indian batters to free their arms inside the first nine overs.

Also, the visitors sent three batters back into the pavilion courtesy of batters trying to be innovative to accelerate the run rate. Sanju Samson was one of the batters to get dismissed courtesy of a poor shot selection even after his catch was dropped earlier on a lofted stroke.

Dhananjaya de Silva bowled the seventh over and Sanju Samson was facing the third ball of the over. He chose to take the aerial route on a tossed-up delivery and decided to slog the ball in the mid-wicket region. Charitha Asalanka came running and dived forward to take the catch. The decision of the catch was sent upstairs and the replays confirmed that the ball had bounced just before the fielder could get his fingers underneath.

However, Sanju Samson hadn’t learned his lesson and committed the same mistake on the penultimate ball of the over. This time the delivery was lightly outside off and the batter once again went for a wild hoick the delivery over the leg side. The attempt resulted in a leading edge and the fielder at short third man took an easy catch.

Here is the video of the dismissal of Sanju Samson:

Fans took note of the incident and heavily criticized Samson for wasting another chance to play a significant knock in his international career.

How often do we see Sanju Samson squandering his chances!#INDvsSL #T20

#BCCISelectionCommittee can I get into 🇮🇳 team? I play like Sanju Samson – close my eyes and try to hit

Situation tailor-made for Sanju Samson and he's thrown it away. Pro-Samson guys won't reason with the fact that today was an easy situation to play in but their idolo decided to ghost in national colours! ONCE AGAIN!#INDvsSL

Sanju samson and his inconsistency in unbearable

Sanju Samson #sympathy Star
When chance was given to u .you didn’t prove ur self 😂 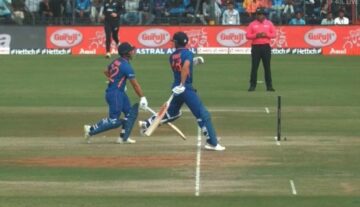