The young Indian wicket-keeper batsman, Sanju Samson scored a phenomenal double century for Kerala against Goa in the ongoing Vijay Hazare Trophy on Saturday. Coming in after the loss of one wicket after four overs, he smashed 212 in just 129 balls and remained unbeaten at the end of Kerala’s innings in the List A match.

Samson scored his first List A century and posted his highest-ever score in the 50-over format. In fact, he even eclipsed his First-Class record of 211 runs. Batting first, Kerala lost Robin Uthappa after 3.5 overs. Samson came in to bat and smashed 21 boundaries and 10 sixes en route to his mammoth total. Samson put up a 338-run stand for the third wicket with Sachin Baby, who also scored a century, as Kerala posted 377 in 50 overs.

ALSO READ: Fans Lashes Out At MCA Management For No roof In Pune Stadium

Former India opener Gautam Gambhir took to Twitter to applaud the Kerala batsman on his outstanding knock. He wrote: “Well done @IamSanjuSamson on a double hundred in a domestic one-day game!!! This man is bursting at seams with talent and talent must meet opportunity very soon”.

Well done @IamSanjuSamson on a double hundred in a domestic one-day game!!! This man is bursting at seams with talent and talent must meet opportunity very soon @BCCI @StarSportsIndia #VijayHazareTrophy #VijayHazare

Sanju’s 212 is the highest List-A score by a wicketkeeper in the world. He pushed Pakistan’s Abid Ali to the second spot. He is the sixth Indian to notch up a double century after Sachin Tendulkar, Virender Sehwag, Rohit Sharma (All in ODIs), Shikhar Dhawan and Karn Kaushal. Sanju reached 200 in 125 balls, the fastest double century among the six. He is also the only Indian to achieve the feat batting at No. 3. All the other five were openers.

In transit in Frankfurt on the way to the @IPUparliament meeting in Belgrade when i get the news that Thiruvananthapuram’s own Sanju Samson has hit 200 in a Vijay Hazare 50 over game! Ten sixes, 20 fours. Don’t know if our white-ball selectors were watching?! pic.twitter.com/tnJmf6QNRM

“Personally, I have always backed Sanju Samson ahead of Rishabh for wicket-keeper batsman’s role,” he had said.

Samson’s previous top score in the 50-over format was a 48-ball 91 that helped India A beat South Africa A last month. The innings had earned him praise from former India bowler Harbhajan Singh, who also suggested that the Kerala gloveman be considered for the no.4 slot for India.

ALSO READ: Statistics Points Out The Better Wicket-keeper Between Saha And Pant

Here are some othe reactions on his phenomenal knock:

Sanju Samson has scored a double-century for Kerala against Goa in Vijay Hazare Trophy.

I'd go with Kishan (in T20Is) rather than Samson or DK. Another big match player and hopefully a match winner for India in the years to come. #INDvSA

Highest scores by a wicket-keeper in List-A matches:- 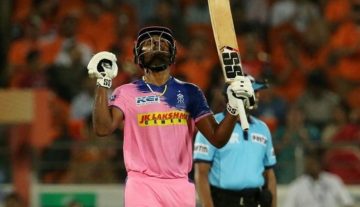