Team India is well on the winning the in the battle to get their hands on the first home Test series title of this year against South Africa. The hosts are currently leading the three-match series by 1-0. Ahead of this series, the team-management was having the headache of choosing between one wicket-keeper batsman between were in big confusion about wicketkeeping. They had the two options, but the Indian skipper, Virat Kohli picked Saha in the team for the Tests series.

Before the series kicked off, Virat said that he feels Saha is the best wicketkeeper in the world. In the latest updates from Cricviz, it is statistically updated that the Bengla gloveman is the best in the world.

Wriddhiman Saha, who will turn 35 on 24th October, can be termed as the best wicketkeeper across the globe in terms of his skills and efficiency. On day 3 of the second Test against Proteas and had pulled off two brilliant catches in the first innings of South Africa.

As per the report of Cricviz, Saha is leading the wicket-keepers’ list because of his ability to take catch behind the stumps against the pacers. He collects 96.9 % deliveries in his gloves that come taking the edge of the willow, followed by Niroshan Dickwella from Sri Lanka is just behind Saha with 95.5%  and the Pant stands on the 9th position with as much as 91.6 % in terms of keeping the wickets.

Saha is yet to prove his worth with the bat in the ongoing Test series and hasn’t contributed any big runs for the team. He returned to the squad after a span of almost 22 months after recovering from his injuries when they were on their tour to West Indies. But, he was not given a single opportunity to perform on that tour.

Later, after witnessing the struggle of Pant with the bat in ODIs and T20Is the management turned their heads towards Saha although Pant is also the part of the squad. 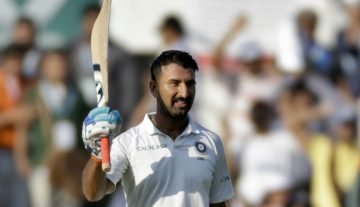 News
By CricShots - Jan 24, 2018
Cheteshwar Pujara Creates Another unwanted Record For Himself