Pakistan captain Sarfraz Ahmed, who has faced the four-match ban from the International Cricket Council (ICC) for a racial comment in an international game, has accepted his mistake and also thanked the Pakistan Cricket Board (PCB) for handling the situation in a good way.

During the second ODI of the ongoing five-match ODI series against the hosts South Africa at Durban on 22 January, Sarfraz made a racial comment at the South African cricketer Andile Phehlukwayo, who later won the Player of the Match award for his all-round match-winning performances (4/22 & 69*).

Later, just prior to beginning the fourth ODI, Sarfraz has been handed the four-match ban from the international cricket by ICC. Soon, the PCB also called back him from the South Africa tour.

After returning to his home, Sarfraz faced the media where he told, “It was a mistake and I have learnt from it.”

Sarfraz also thanked the PCB for handling the situation well. Talking about his return to the country, Sarfraz said that it would provide some crucial rest before the upcoming Pakistan Super League (PSL 2019).

He added, “I am thankful to the PCB for the way they have handled this case. I have no issues with the PCB decision to call me back. In a way I see it as a good chance to get some rest and prepare for the coming Pakistan Super League as I have been playing non-stop cricket for around five months now.”

Akhtar reacted in a Twitter video, “This is not acceptable as a Pakistani. In my opinion he did this in the heat of the moment. I think he should apologize publicly.”

In the response, Sarfraz said according to Geo TV, “He [Shoaib Akhtar] is attacking me personally not criticising.” 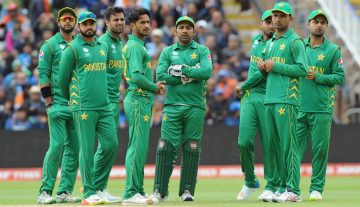 News
By Sandy - Jun 28, 2018
Pakistan will continue their home venue in UAE