Chris Gayle has often regarded as Bradman of T20 cricket and he has proved the statement right with his batting. However, this T20 magician was unable to fetch any bid for himself during the recently concluded auction for the Indian Premier League 2018.

Gayle is an IPL veteran but his former franchise Royal Challengers Bangalore was in no mood to keep an old horse in their course. But Virender Sehwag sensed this as an opportunity and gave him a chance to be a part of Kings XI Punjab.

After being unsold in first two rounds of the auction, Gayle finally received one bid, which came from Preity Zinta. Viru murmured something in her ears and she straightaway raised her hand to buy Gayle at his base price of Rs 2 crore.

Sehwag explained this move and quoted to www.amarujala.com: “Simply having him (Gayle) in your side means a lot. Being an opening batsman, Gayle can prove to be a danger to any opposition.”

The Director of KXIP further added that Gayle may feature in few games for the franchise. “Gayle’s brand value speaks for himself and how effective he is in this format. We decided to bring in Gayle as a backup option for the opening slots,” he told.

Gayle holds numerous batting records in the cash-rich league with his bat. His unbeaten 175 against Pune Warriors are the record for highest individual score in T20 cricket. Also, he has 20 tons in T20s and over 10,000 runs in this format.

In IPL itself, he has four centuries – all came for RCB – in the first decade of this competition. 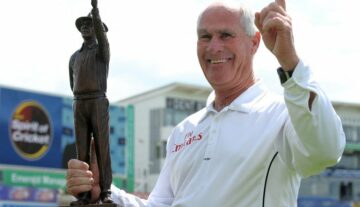